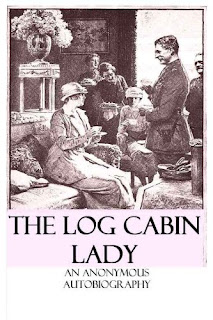 Review:  This is a true life account of one woman's difficult transition from frontier girl to society girl.  It really appealed to me because we so often hear about Cinderella stories- beautiful poor, young girls swept off their feet by handsome rich men and go off to live happily ever after in a castle.  And that may be true to an extent, but it ignores the very real difficulties those women faced in needing to learn all of the etiquette, rules and complex interactions that regulated life in high society.  This is the only book that I've encountered that really approaches this issue in an honest and sympathetic way.  Nowadays, most historical romance novels are written with heroines that roll their eyes at convention and are bored by learning how to properly address a Duke and don't care to know how many times one should curtsey in front of the Queen of England.  But those heroines ignore the very real consequences that arise when a person doesn't behave correctly.  This anonymous writer is well aware of those consequences.

I am not entirely sure why she wrote this short book in the manner that she did.  For example, she doesn't set down all the rules for young girls to follow.  She doesn't give them advice on what to do in certain situations.  She just relates her own early bloopers and then pleads with her readers to teach women how to behave properly in Society.  It's a strange thing to do, I feel, because her writing doesn't actually help any girls that may be in the same situation as her.  She just wants other people to help them.

Because of this, I think The Log Cabin Lady is very dated.  It would be an interesting and useful read if it actually gave specific directions.  I think I would be pretty fascinated to learn exactly what a woman should wear in her presentation to the Queen of England, what topics are appropriate for dinnertime conversation, how you should seat people at dinner, etc.  But none of that is touched upon here, except very peripherally, when our narrator makes a blunder.

So instead, this journal is more a group of vignettes written with the weirdly desperate hope of giving girls etiquette training at home while they're young so that they won't embarrass themselves overseas by doing something as ghastly as asking a general to sit down in the presence of a standing king.


If any one had told that girl the sacredness of the convention she had ignored, she would have suffered as keenly as I had suffered in my youth. It was such a simple thing to learn; yet who in the middle of a war would think of stopping to run a class in etiquette? The point is that any girl capable of crossing half the world to do a big job and a hard one in a foreign land should have been given the opportunity to learn the rules of social intercourse.

I personally would turn that statement around on its head and say, "Why, in the middle of a war, are you so worried about a girl requesting a general to sit down in a king's presence?"  But perhaps I am not the target audience.

The Log Cabin Lady also gets strangely patriotic- not about America as a whole, but about the Midwest.  As a born and bred Midwesterner, I completely sympathize with her, but it is bizarre because the woman keeps talking about how Americans need to cultivate good manners so that we can impress Europeans, but then on the other hand, she really prides Americans are being down-to-earth and not caring about such things.


It was like a bath for my soul. Brains count out West. Anybody who tries to show off is snubbed.
You must do something to be anything in the Middle West; just to have something doesn't count. You don't list your ancestors as you must in Virginia or the Carolinas, but to feel self-respecting you must do something.

So really... not sure what the Log Cabin Lady wants.  Refined European manners that will make even the most awkward Illinois girl feel comfortable in drawing rooms around the world?  Or good old American honesty and integrity, where class and ancestry don't matter nearly so much as the work you do yourself?  It seemed to me like she wanted both, and her narrative was very winding and misguided because of it.

Also, her rich and handsome diplomat husband seemed like a first-class jerk to me, so I am not sure I trust her taste in all things, anyway.