I haven't posted a review here in a while, not because I'm not reading but because I don't have a lot to say about most of the books I've come across in the last few weeks. I've abandoned most of them, but even those I've managed to finish have been meh. Just in a reading slump, I guess. I did find The Wheel Spins (book The Lady Vanishes was based on) interesting, but it's not in the public domain. I have some brief thoughts on the following novels, though, which might be worth checking out if you're interested.


The Hour of the Dragon by Robert E. Howard

Conan is the King of Aquilonia after killing the previous ruler. You know that's not going to last long, and it doesn't: a group of conspirators raise the evil sorcerer Xaltotun from the dead so they can depose Conan and put some other guy on the throne. Due to luck and a slave girl with a crush, Conan manages to escape with his life, but can't regain his throne without a magical stone called the Heart of Ahriman.

This is the first and only novel-length Conan the Barbarian story Howard wrote. I didn't dislike it, but it also wasn't as amazeballs as some of the shorter stories I've read by him. There was only one major female character, who was kind of boring, and I found Xaltotun more interesting than Conan. I did think Howard did a great job of making Conan seem more human in this story, but where were the crazy twists?? The Hour of the Dragon was just too long and felt slightly draggy.

Download The Hour of the Dragon by Robert E. Howard at Project Gutenberg|Librivox 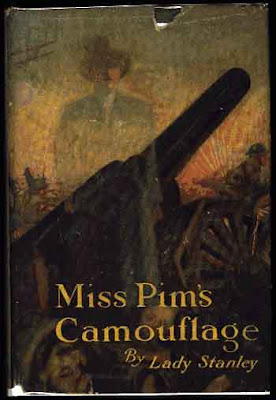 Miss Pim is a middle-aged spinster who feels nearly invisible. Then, one day, she doesn't just feel invisible—she becomes invisible! Soon all the guys at the War Office are feeling her invisible body up and then she's off to France to work as a spy, with the ultimate goal of assassinating the Kaiser.

I really loved the concept of this novel. Old lady adventures for the win! However, there was just wayyyyy too much anti-German propaganda in this book. I mean, I know me some anti-German propaganda (it's impossible to avoid in early 20th century English novels, and even some American novels), but in the case of Miss Pim's Camouflage it was so insanely over-the-top I felt like it overshadowed the story completely.

Interesting side note: if Google is to be trusted, Dorothy Stanley was also a successful painter known as Dorothy Tanner.

Aucassin is the son of a count and he really wants to marry a girl named Nicolette, but his dad's like, "Yeahhhhh, Nicolette is pretty and all, but she's a slave and not really appropriate marriage material. How about this nice princess?" And Aucassin's like, "This isn't the 11th century anymore, Dad, I can do what I want. I hate you!" So the count locks Aucassin in his room the dungeon and sends Nicolette away to a nasty viscount. Will these two crazy kids ever get together?

At first I really enjoyed this poem because Aucassin was an idiot. It was quite entertaining. But then Aucassin also turned out to be really mean. I can handle stupid, and I can handle nasty, but stupid AND nasty? I was kind of hoping he'd take a short plunge into a long spear, but instead he and Nicolette ended up getting together through a series of coincidences that were eye-rollingly unbelievable. But Wikipedia says it's meant to be a parody, so maybe that was the point? Either way, Aucassin was too annoying for me.

Download Aucassin et Nicolette at Project Gutenberg|Librivox
Posted by Heidenkind at 11:24 AM

Review of THE SECRET ADVERSARY by Agatha Christie


Tommy and Tuppence are old friends who run into one another in post-WWI London and find themselves in the same boat: they're broke, unable to find work, and on the verge of being thrown out of their respective abodes. As they're musing over their impecunious fortunes, Tuppence has an idea: they should start their own business and be professional adventurers! Tommy agrees to put an ad in the paper just to humor her, but no sooner do they part ways than Tuppence receives a job offer from a very suspicious bloke. Beggars can't be choosers, however, so Tuppence agrees to accept a retainer, and in short order she and Tommy are sucked into a world of international intrigue, missing documents, spies, and master criminals. And that's just in the first few chapters!

This is only the third Agatha Christie novel I've read. The other two were Murder on the Orient Express, which was very good but didn't inspire me to read more Hercule Poirot books; and The Mysterious Affair at Styles, which was just okay. So I wasn't expecting to be wowed by The Secret Adversary.

BUT I TOTALLY WAS.

The Secret Adversary is a very different type of book from Christie's Hercule Poirot novels. For one, it's hilarious. Whenever Tommy and Tuppence get together there's snappy, clever dialog, and the story is delightfully ridiculous with plenty of opportunities for hijinks. The coincidences in this novel are just mind-boggling, but whatever. As long as Tommy and Tuppence continue having adventures, Christie can throw as many incredible happenstances into this book as she wants.

Speaking of Tommy and Tuppence... I LOVE THEM! I need my own Tommy and Tuppence to hang with, you guys. I AM SERIOUS. The other characters in the book are also really fun, from Julius P. Hersheimmer, the American billionaire, to Albert, the elevator operator who loves gangster movies.

As for the mystery, it worked surprisingly well considering the pool of suspects consists of basically two, possibly three, men. Christie does a great job of planting red herrings that had me thinking I knew who Mr. Brown—the criminal mastermind—was, but at the same time not being quite sure.

The Secret Adversary is in no way a realistic book. It is a proudly fluffy, sublimely ridiculous tale. In a lot of ways it reminded me of The Man Who Was Thursday (which I loved), only much less metaphysical: the cabal organization, run by a mysterious man who is everywhere yet whom no one has ever seen; a series of fun, entertaining adventures; and then everyone lives happily ever after. In a word, delightful.

I can't wait to read all of Tommy and Tuppence's other stories! If you haven't read anything by Christie before, The Secret Adversary is a great place to start.


Download The Secret Adversary by Agatha Christie at Project Gutenberg
Posted by Heidenkind at 4:00 AM