Solomon Kane, an English adventurer with a wicked blade, is wandering aimlessly around France when he randomly stumbles across a girl. She's been robbed and attacked and left to die. As her life fades away, Kane decides to seek vengeance! against leader of the brigands who killed her, Le Loup.

Red Shadows isn't a Conan story, which is slightly disappointing. But it is a swashbuckling tale with swordfights, gigantic Baroque hats, and over-the-top dialog. ("Fires of Hades! A girl!") So it's still really fun.

The writing style is more abrupt than Robert E. Howard's Conan novels: each chapter feels like a vignette and then we're abruptly moved to a completely different place and time. I kind of think Solomon also has less personality than Conan; or at least, his motivations are less clear. Conan's motivation is self-interest, which isn't particularly complex, but Kane is a like a vengeance machine. Like that's all he does, for no benefit to himself that I could see. In fact, it seems to bum him out. Maybe some of his backstory is revealed in the later stories, but for Red Shadows there wasn't a lot of character development going on. Maybe if the only female character hadn't died in chapter one I'd be happier with this novella.

Still, overall it was a good story. Kane travels to Africa in his obsessive quest to take down Le Loup, which is totally random, and there are literally pages where all Howard talks about are his characters' eyes as they have the longest stare-down in history. I love it. And I definitely wouldn't object to reading more Solomon Kane stories, because who doesn't love a highly skilled swordsman whose mission is vengeance, right?


Download Red Shadows by Robert E. Howard at Project Gutenberg Australia|Librivox
Posted by Heidenkind at 4:00 AM 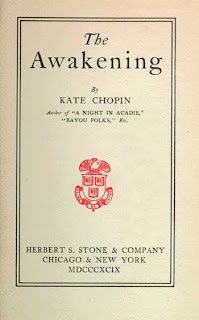 "The voice of the sea is seductive; never ceasing, whispering, clamoring, murmuring, inviting the soul to wander for a spell in abysses of solitude; to lose itself in mazes of inward contemplation."
This book (a novel? A novella?) is really the story of a coming-of-age of an adult woman in Louisiana who is struggling with becoming an independent person while being married to a wealthy man she doesn’t particularly love.  A young male acquaintance named Robert is the catalyst for her realization of the possibility that she could be happy and independent, but how to do that, in this world of strict etiquette and gender expectations?
I had been thinking (from an earlier reading) that this edition of Chopin’s work was an early Feminist work (published in 1899). However, then, on further delving, it was pointed out that very few people read “The Awakening” when it first came out as it was not a commercial success and it received some pretty awful reviews so it wasn’t republished.
Her other short stories were published and even anthologized, but “The Awakening” didn’t really receive much positive attention until 1969 when a volume of her work was republished and regained attention.  And this is rather a shame, as this is a good read with some great descriptions of Bayou coastal life and life in the South.
On reflection, Chopin’s The Awakening’s critical rejection could also have been to the misogyny of the time – most of the media reviewers were men (at that time), and as her leading character was a frustrated married woman who refused to accept the limitations of the woman’s role and instead chose an alternative way (thus completely rejecting societal mores), it might not be that surprising that the male reviewers did not embrace this radical viewpoint.
"Has she," asked the Doctor, with a smile, "has she been associating of late with a circle of pseudo-intellectual women—super-spiritual superior beings? My wife has been telling me about them."
So, yes, it’s a Feminist work but it’s been quite widely argued that it wasn’t written to bring attention to the issue of feminism, emancipation or any other cause. Chopin was not involved in any Feminist or other causes (according to researchers) and it’s argued that Chopin was just writing the world as she saw it as an artist and writer and not trying to change the world. She wasn’t using it as a tool to further women’s suffrage, even accidentally.
However, as I write this, surely it’s clear from even a cursory reading of this that Chopin believed in the right of a woman to have an independent life and was a pre-supporter of Woolf’s concept of “a room of her own”, whether written down or not.  And by so doing, wouldn’t it be logical that she would want all the other freedoms that would come with that? Or was it the whole concept of individual freedom that Chopin was admiring and gender was irrelevant? And how would race fit into that? (She lived for most of her life in Louisiana which was a huge piece in the slavery industry picture then.)
I don’t know. It’s tough to read something that was written at the end of the nineteenth century without looking at it with the perspective of a twenty-first century reader. How can you really ever take that pair of glasses off because your (own) experience of life has to influence how you interpret things, especially works as nebulous as art? Perhaps Chopin was really just writing this to make a buck and there wasn’t any extra meaning to this whole thing.
Download The Awakening by Kate Chopin at Project Gutenberg|Librivox| 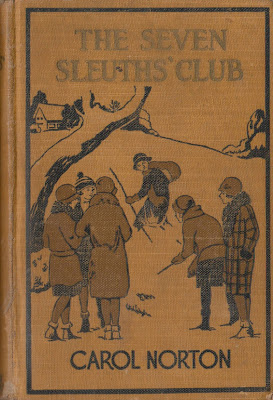 In the small town of Sunnyside, seven high school girls start a club called the SSC, which originally means Spread Sunshine Club until one of the girls figures out their brothers are in a Conan-Doyle sleuthing club. After he tells her girls can't solve mysteries, they decide to change their name to the Seven Sleuths Club and look for mysteries to solve. But before that happens, they have to deal with their annoying brothers, schoolwork, and a new girl in town who's a bit of a snob.

The Seven Sleuths' Club is a combination of Little Women and The Babysitters' Club, with Moral Lessons about treating everyone equally regardless of class or race (and, more subtly, irrespective of gender), the value of hard work, and the importance of kindness and compassion. Despite that, the book doesn't come off as preachy—I probably only noticed the Moral Lessons because I'm old and I notice stuff like that. The lessons are well-integrated into the story and if I was a middle-grade reader—the novel's intended audience—it wouldn't have been too twee for me.

Although there are eight main girl characters, the heroine of the story is really Geraldine, a rich city girl whose father sends her to Sunnyside because she's traipsing out with boys at night without telling him. As her dad explains in a letter to the Colonel, who's taking care of her, "Now I want Geraldine to have boy friends in a frank, open way, but of this sub-rosa business, my son and I heartily disapprove," which is quite open-minded of him. At first the girls of the SSC make fun of Geraldine because she's a horrible snob, but gradually we learn she's just a poor little rich girl who never had a mom to teach her manners and she gets an attitude adjustment.

The girls of the SSC were pretty interchangeable as characters—they're all more or less church-going goody goodies—but I liked Geraldine. Another character whom I LOVED was Danny O’Neil, the son of a tenant farmer who's Irish. Danny's passion is art but his dad beats him whenever he sees him drawing. Now here's the kicker: for Valentine's Day, he carves book ends for one of the girls because he know she loves to read! BEST GIFT EVER. He is so sweet.

The Seven Sleuths' Club most definitely passes the Bechdel Test—the girls talk about school work, events they're planning, their hobbies, and of course what sorts of mysteries they're going to solve (it takes nearly the entire book for them to find one). But I'm not sure I would call it feminist or say that the girls have demonstrable agency, since all the decisions they make are a response to what men do. It starts with the formation of the club—the boys have a detective club, we need a detective club!—and moves on to Geraldine, who only decides to "improve herself" when the boy she's crushing on says he wants to marry a girl who's a decent homemaker. *eyeroll* Still, there are some light—very light—digs at the boys, and eventually the two clubs join in an equal partnership. Oh, and the idea that men and women can't have platonic friendships? Carol Norton obviously doesn't agree: although there are a few romances going on in the story, for the most part all the girls and boys in the novel are simply friends who hang out together.

While The Seven Sleuths' Club isn't exactly feminist by modern standards, and is a little preachy and overly cute (although much less so than other books of its ilk like, say, Little Women), I still enjoyed it and loved the characters. Definitely worth checking out if you're interested in historic middle-grade fiction!


Download The Seven Sleuths' Club by Carol Norton at Project Gutenberg|Librivox
Posted by Heidenkind at 4:00 AM