Review: THE HOUSE OF THE VAMPIRE by George Sylvester Viereck 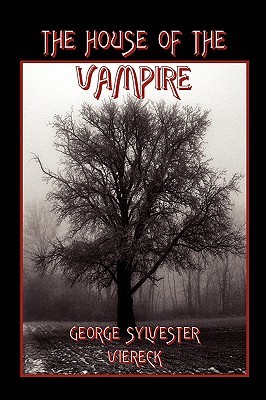 Ernest is a young writer with great ambition, so he's thrilled when the famous author, Reginald Clarke, offers him a room in his house while Ernest works on the next Great American Novel. Weirdly, though, Ernest can never focus on his own work; and in the meanwhile Reginald Clarke's most recent writings seem to be taken directly from Ernest's ideas, even though he never told anyone about them. Will Ernest's girlfriend and bestie be able to rescue him from Reginald Clarke's clutches before he loses his talent and writing ability forever?

When Chris reviewed The House of the Vampire here last year, I immediately knew I wanted to read it. A psychic vampire who steals people's ideas? Sounds like a few professors I've known (haha, I kid—but the relationship between Clarke and Ernest does have a very mentorship-gone-wrong feeling to it that sometimes happens in academia).

Despite Chris's review, though, The House of the Vampire wasn't exactly what I was expecting. I was thinking Reginald Clarke's house would be chock full of young artists participating in a bacchanal free-for-all, but instead Reginald Clarke—he's always referred to by both his first and last names—very monogamously focuses on destroying one artist's life at a time.

There was also less homosexual innuendo than I expected, considering this book is touted at the "first gay vampire book" (aside from, you know, Carmilla). Ernest and his bestie have a rather close relationship, but both he and Reginald Clarke are obviously interested in women; and honestly, in comparison to the Victorian vampire novels I've read, the sexual innuendo in The House of the Vampire bordered on nonexistent. Reginald Clarke's psychic vampirism is a metaphor, of course, just not for sex. Instead, it represents unchecked power. Rather than being modeled off of traditional vampires, Reginald Clarke is more along the lines of Nietzsche's Übermensch, which  Rüdiger Safranski said, "...represents a higher biological type reached through artificial selection and at the same time is also an ideal for anyone who is creative and strong enough to master the whole spectrum of human potential, good and 'evil', to become an 'artist-tyrant'." (Wikipedia) That's a pretty close description of Reginald Clarke, and I would say that it's clear George Sylvester Viereck was not a proponent of Nietzsche's philosophy IF I didn't also know he was a full-on Nazi. Interesting dichotomy of belief there.

I was also pleasantly surprised—even shocked—at the depth of insight Viereck brought to Ethel, one of Reginald Clarke's former victims and Ernest's muse. She's The House of the Vampire's single major female character, so it's not like the book passes the Bechdel Test or anything; but Viereck does treat her as a 100% human, fully-realized character who drives the actions of the main characters in the second half of the book. She's intelligent, independent, and sympathetic. She might be the best female character written by a man I've ever come across.

Overall The House of the Vampire was a very interesting, entertaining, slightly creepy read. It's more about art and ideas than vampires, but I'm cool with that. Definitely worth checking out.


Download The House of the Vampire by George Sylvester Viereck at Project Gutenberg|Librivox
Posted by Heidenkind at 4:00 AM