Review: Barks and Purrs by Colette 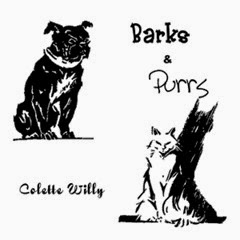 Ever wonder what goes through your pets’ minds? What do they worry about? What makes them happy?

Colette’s Barks and Purrs (aka Dialogues des Bêtes) translated by Marie Kelly is a delightful series of dialogues that will charm any pet owner. I enjoyed it so much I listened to the audiobook twice, something I never do. I had to make sure I didn’t miss a thing.

Barks and Purrs covers the daily happenings of Toby-Dog (a French bull dog) and Kiki the Demure (a Maltese cat).  He and She (the owners) have small parts to play. Toby-Dog and Kiki must endure such travesties as a late dinner, a storm, a train ride, and the illness of She. These events upset their schedules and cause much devastation for the poor animals. There are times of comfort as well, like resting in front of a warm fire.

Barks and Purrs could have been twee but this is Colette so it definitely isn’t. The animals aren’t too anthropomorphic. They don’t wear pants or help solve mysteries. They are just pets doing pet things. Colette doesn’t shy away from the realities of nature either. Kiki says:

One bound at exactly the right moment and my feeble prey is panting under me. Oh, the ridiculous effort of a weak animal—its tiny ineffectual claws and pointed wings beating against my face! My jaws will open to the splitting point and my perfect nose wrinkle ferociously, for the joy of holding a living, terrified body.

The animals’ attitudes toward humans are about what you would expect. Toby-Dog wants to be loved all the time: I love—Her and Him devotedly, with a love that lifts me up to them. It suffices to occupy my time and heart. While Kiki only wants to be worshiped: A cat is a guest in the house, not a plaything.

The dialogues are full of rich descriptive prose.

How beautiful you are, Fire! Out from your ruddy center shoot tatters and shreds of gold, sudden spurts of blue, and smoke that twists upwards and draws queer shapes of beasts ... Oh, but I'm hot! Gently, gently, sovereign Fire, see how my truffle of a nose is drying up and cracking, and my ears—are they not ablaze? I adjure thee with suppliant paw. I groan ... ah ... I can endure it no longer! ... (He turns away.) Nothing is ever perfect. The east wind coming under the door nips my hind-legs. Well, it can't be helped! I'll freeze behind if I must, provided I can adore you face to face.

Who would imagine their dog thinking of fire in such a way? It’s gorgeous!

Now let me tell you about the audio! What an excellent production by Librivox volunteers. The narrator, Sandra, has a lovely accented voice. Bob Gonzalez is Kiki the Demure and his rich, smooth voice is perfectly suited for a spoiled cat. Toby-Dog is played by Troy Bond who has the best playful bark. The other players are excellent as well. I was very impressed. Bravo!

For fun, here is Henri the French Existentialist Cat, who is a lot like Kiki the Demure.

Download Barks and Purrs by Colette at Project Gutenberg|Librivox|

Posted by Chrisbookarama at 12:00 AM 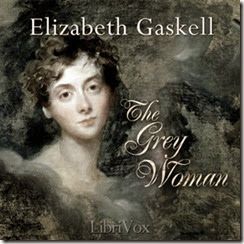 The Grey Woman is an excellent Gothic story with a Bluebeard twist. There’s a castle, a damsel in distress, and a husband with a secret. However, the hero of this story isn’t a dude on a white horse but a bad ass older woman: Amante.

A traveller visits a mill/coffeehouse in Germany and notices a portrait of a pale lady.


“It was that of a young girl of extreme beauty; evidently of middle rank. There was a sensitive refinement in her face, as if she almost shrank from the gaze which, of necessity, the painter must have fixed upon her.”

The traveller asks to know her story. The owner replies, “Well, it just so happens that she was my great-aunt Anna and she wrote a manuscript explaining how she ended up so white. Here, read it.” As you do. The traveller sets down to read it, then the story is told in The Grey Woman’s own words.

When Anna was a young lass, her father remarried and the new lady of the house was anxious to get rid of her. Instead of marrying a local yokel, Anna accepts an invitation to her rich friend Sophie’s estate where she meets a handsome French stranger. Monsieur de la Tourelle appears to be a gentleman. He has his sights on Anna. She dances with him at parties when he asks. She’s too shy and overcome by his charms to say no.


One day Sophie’s mother tells Anna that she’s written to her father about her impending engagement. Anna is shocked! How could she be getting engaged and not even know it?! She’s informed that it’s too late for protests now. Anna received Monsieur de la Tourelle’s attentions without complaint and that means she’s given herself for life to a perfect stranger. Oh well, what can you do when it’s 1789 and women have no rights. *shrug*

So Anna marries her Frenchman and he ships her off to some castle in the middle of nowhere with no friends or family. He immediately exhibits signs of an abuser. He demands that she keep to only one area of their home where he can keep an eye on her. He’s jealous of even her love of her family and she is never allowed to visit them. Unsurprisingly, she becomes depressed.

In an uncharacteristic act of compassion, Monsieur hires a lady’s maid to keep her company. Amante “tall and handsome, though upwards of forty” instantly takes on the role of Anna’s bodyguard. She runs interference between Anna and the surly servants. Amante is especially helpful now that Anna is pregnant.

Amante discovers that Anna isn’t getting her mail and the two hatch a plan to break into Monsieur’s apartments to retrieve them. In the process, Anna learns her husband’s secret, a secret so terrible that it sends Anna and Amante into hiding!

Amante is The Boss! She’s quick thinking and always one step ahead of the bad guys. She protects her mistress with her life, even changing her identity to protect her. The pair have many hair raising close calls but Amante keeps her head. Talk about a Strong Female Character! Amante is it.

As for Anna, I’m not sure why she inspires such devotion but the heart wants what the heart wants, I guess. Perhaps it was because of the baby. Amante did love that baby.

Part of why I love blogging for Project Gutenberg Project is discovering long lost gems like this The Grey Woman. Sure, it’s soapy and melodramatic with a Villainous Villain but it’s pure entertainment with some feminism thrown in. Anna and Amante, a disobedient wife and a maid, outwit and outrun ruffians. Courage and cleverness rule the day.

This was another Librivox recording I took in. Jane Greensmith narrates the short story.

Download The Grey Woman by Elizabeth Gaskell at Project Gutenberg|Librivox|
Posted by Chrisbookarama at 8:08 PM