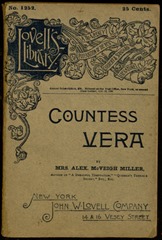 Leslie Noble finds his wife of one day dead in her room. Dead! Unwilling to live with a man who does not love her, she committed suicide. Vera Campbell had agreed to marry him to escape her Cinderella-like life of servitude to her aunt Marcia Cleveland and cousin Ivy. After her father abandoned her and her mother, they had nowhere else to go and were dependent upon their ‘kindness.’ Seventeen years of heartbreak were too much for Mrs Campbell, with her last breath she begged Leslie to marry Vera. This was the result.

Shortly after her funeral, Vera’s father (now an Earl) has returned to claim his wife and child, who he mistakenly left to fend for themselves. Too late! Both are dead. But when he unearths his child to gaze upon her face one last time, he discovers that she isn’t dead at all. He whisks her off to England to make up for lost time.

Vera keeps the secret of her marriage to herself, vowing to never remarry. She of course falls in love with a wealthy American. Angst! Then it appears that her husband has died. Yay! But just when happiness is within her reach her father dies and commands her to make an Oath of Vengeance against her cruel aunt. REVENGE!


I’ve never read a dime novel before, which is a shame because this one was fun! Dime novels were cheap entertainment for the masses in the late 1800s-early 1900s. They were a lucrative business at that time. Louisa May Alcott herself wrote a few to make ends meet. The plots were sensational and usually featured a young heroine in peril.

This heroine in peril is Vera Campbell. She doesn’t have much in the personality department, but she does have ‘dark flashing eyes’ and an Oath of Vengeance. Her Aunt Marcia is the worst. She is the most evil of aunts. She could rival Cinderella’s stepmother.


The writing is not great, and apparently neither was the editing. The transcriber has a list a mile long of spelling and grammar corrections. The plot is super soapy. It’s like Days of Our Lives but with an ending. It is bonkers with premature burials, bigamy, murder-plots, poisons, and kidnappings. I loved it.

Mrs Alex McVeigh Miller (not her real name) wrote at least 80 dime novels (12 found on Project Gutenberg). A look at the synopsises reveals that some are similar in plot. Reading them could get monotonous. So, I’ll proceed with caution and space them out.  Who can resist a title like The Fatal Birthday though?

If you can put up with third person past tense, cheesy dialogue and repetitive phrases (dark eyes everywhere), you’ll enjoy this potboiler.

Download Countess Vera, or The Oath of Vengeance by Mrs Alex McVeigh Miller at Project Gutenberg
Posted by Chrisbookarama at 4:00 AM