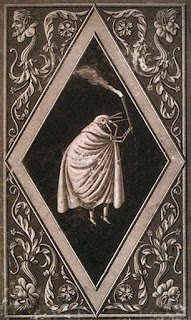 Peregrinus Tyss is an odd duck. If he was living in the 21st century, he'd probably be diagnosed with Asperger's; but as it is, he lives in 19th-century Frankfurt and people just assume he's stupid.

Since Peregrin is an orphan and has no friends, every Christmas he picks one family and brings a bunch of presents to them dressed as Santa. But while delivering presents to a bookseller and his children, Peregrin is assaulted by a strange, beautiful woman who acts like she knows him. This lady is obviously Bad News (obvious to the reader, that is); fortunately for Peregrin, he's managed to collect Master Flea, whom the woman needs to keep herself alive. Grateful for Peregrin's protection, Master Flea helps him navigate the waters of social life among the muggles and the mythical beings that suddenly surround him.

I enjoyed Master Flea at first, but as the story went on it started to wear on me. First of all, the eponymous Flea doesn't even show up until the "Third Adventure," nearly halfway through the book! Before that, we are introduced to Peregrin, a femme fatale named alternatively "fair Alina," Dörtje Elverdink, and a mythical princess called Gamaheh of Famagusta; a guy named George Pepusch, who's actually the Thistle of Zeherit; Pepusch's bestie, Leuwenhock, who's actually a magician; Peregrin's lodger, who's Leuwenhock's nemesis and fellow magician; and et. al. I probably forgot a few people there, but you get the idea. This is the type of book where everyone has two or three names, like Lord of the Rings, only not as tolerable. And I was never able to get through Lord of the Rings, sooooooooo.

This is also the type of book where there's only one female character, and she's not really a character, more of a MacGuffin. Alllllllll the men in this story are after Alina/Dörtje/Gamaheh, for no reason I could see because she's a total bitch.  But she is beautiful, so I suppose that's all that matters.

There are some fun scenes in Master Flea, like when Master Flea gives Peregrin a glass that lets him see what people are *really* thinking when they talk to him (the glass, incidentally, is a small concave disk that fits over his eye, and to take it out he leans over and blinks very wide and it pops out and back into its box–so, ETA Hoffmann basically invented contact lenses). Naturally, whatever they're thinking is the exact opposite of what they're saying. But this went on for way too long and there was way too much of it.

The book also bounced around a lot and there was a ton of information about other fairies and mythical creatures, most of which I not only didn't care about but was annoyed with, considering keeping the thrice-named circus of the regular characters straight was exhausting enough.

Finally, I found the conclusion to be extremely irritating.

Master Flea a really weird book. Like, REALLY weird. It's over-the-top and all over the place. I probably wouldn't recommend this book to anyone, and I think I'm going to avoid ETA Hoffmann books in the future from now on. Sorry, ETA.

John and Annie are northerners who relocate to North Carolina for Annie's health, and want to invest in some property. The first day looking around their new neighborhood they meet old Uncle Julius McAdoo, a former slave who John enlists for help. Uncle Julius knows everything there is to know about the area, the former plantations, and their owners, and loves to tell stories about what life was like before the Civil War–stories filled with strange happenings and "conjure," a hoodoo kind of magic. John dismisses these tales as ignorant and fanciful, but that doesn't stop Uncle Julius from using them as a metaphor to manipulate John and Annie for his own purposes.

This is a book I would recommend to anyone. First of all, the writing style is super-smart and clever. Charles Waddell Chesnutt definitely had a way with words, and there's an underlying current of humor and intelligence in the narration. Secondly, the stories themselves are simply fascinating. Some of them are comedic; many of them are tragedies. But taken on their own they stand up with the greatest of Aesop's Fables or Grimm's fairy tales. And lastly, The Conjure Woman is book that's not simply a collection of stories–it's about race relations in the South after the Civil War.

Chesnutt was a 19th-century African American journalist who became an influential early member of the NAACP. The Conjure Woman was his first book, and it's cleverly framed by the contemporary (in Chesnutt's time) lives of John and Annie. John's perspective gives the stories context–for example, after "The Gray Wolf's Ha'nt," John suspects Uncle Julius told him this story for the express purpose of keeping a piece of John's property undeveloped. Julius is obviously not afraid to take advantage of the ignorance of his boss, and tries to influence both him and Annie with his tales.

When it comes to Annie, however, one gets the feeling that her view of Uncle Julius is both more realistic and more sympathetic than John's: John sees the antebellum South in a romantic light, whereas Annie can understand the precariousness and harshness of life from Julius' tales.

But the main focus of The Conjure Woman is, of course, Uncle Julius' stories, which are bizarre and terrifying and definitely have the atmosphere of another world. In tone they kind of reminded me of Django Unchained: full of danger, mystery, vengeance, love, dark humor, violence, and the sense that this a place where anything can happen. But that doesn't mean people in the stories are powerless. They have the conjure woman!

I listened to the Librivox recording of The Conjure Woman, and the narrator, James K. White, did an absolutely fantastic job. I can't imagine anyone performing this book better. His accents and voices were absolutely perfect.

I'd definitely recommend The Conjure Woman if you're looking for a classic about the lives of slaves in the US that takes an honest look at race relations in both pre- and post-Civil War America, yet isn't a downer. I'm really happy I decided to give this one a try!

Download The Conjure Woman by Charles Waddell Chesnutt at Project Gutenberg|Librivox
Posted by Heidenkind at 5:53 PM