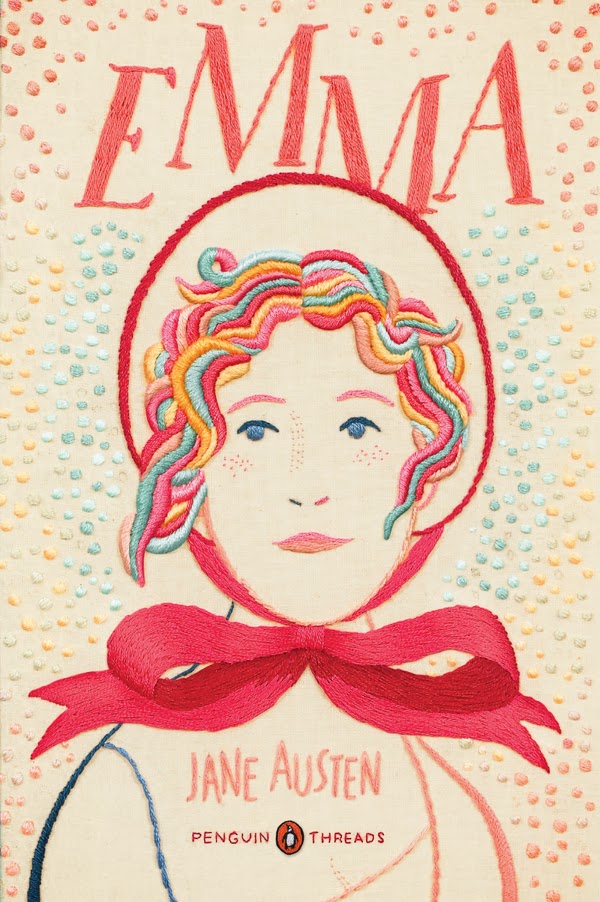 
The life of young, pretty, clever, and rich Emma Woodhouse is thrown into chaos—or at least discomfort—when her governess and best friend, Miss Taylor, gets married. Lonely, Emma tries to find other friendships in the small town of Highbury, but her managing ways only seem to spread misery, as her neighbor Mr. Knightley delights in pointing out. Will Emma ever be able to settle into a life of happiness, peace, and tranquility?

I actually liked Emma a lot more than I thought I would based on the film and television adaptations I've seen (of which there are an astonishing number, all things considered). In most adaptations, Emma comes across as a spoiled brat. Not to say she isn't, but I found her more sympathetic in the book.

Emma is separated into three parts: Emma vs Harriet Smith, Emma vs Jane Fairfax, and Emma vs Emma. Emma vs Harriet Smith was, quite frankly, REALLY hard to get through. If I hadn't promised Kelly from Reading with Analysis that I would read Emma for Jane Austen January, I probably would have DNF'd it before I got to Part 2. Emma is just SUCH a manipulative bitch. It was so bad I wondered if Jane Austen wasn't making fun of Prince George, whom she hated but was forced to dedicate Emma to (I guess because he asked her to). After all, like Prinny, Emma is the princess of her little village: no other person is her social equal, and that is NOT a benefit for her, personality- or character-wise. Yet everyone inexplicably thinks she's wonderful; and even if they don't, they don't say anything about it. Also like Prinny, Emma's dad is CRAZY. But, I will say this much for her: when Emma realizes she's made a mistake, she owns up to it and apologizes right away. So going into Part 2, I was inclined to think better of her.

I found Emma vs Jane Fairfax to be more amusing than Part 1. Mostly because I already knew what was going to happen, so I could enjoy the irony. But there was one thing that drove me insane: conversations that went on and on AND ON. Like we get it already! The joke has been made! Let me give you some examples of the fascinating topics under discussion:

The post office. Did you know they ship mail? And the mail often reaches its recipient! It's a wonder of organization, is what it is. Let's discuss this for TEN PAGES.
*silently screaming*<-me


Gruel! It's a healthy dinner option for anyone who's ill or has completely given up on life. But did you know it shouldn't be too thick? Nor too thin.


In Emma vs Emma, Emma goes into a hate spiral because Harriet tells her Mr. Knightley is in love with her. And since everyone except Knightley has noticed he's a being moody bastard, Emma is inclined to believe her. I do have to admit I found Mr. Knightley pretty attractive and thought he and Emma had great chemistry. That is, at least until the part of the book where Emma gives him Frank Churchill's letter (and people today whine about email forwarding...) and Knightley goes through it line by line, criticizing everything Frank ever did or was wont to do. Because Knightley's not only a good man, a kind man, a beautiful man; he's the most perfect man to have ever walked the earth! At least since Jesus.


But enough unnecessary summary. The sculptor Louise Nevelson once said, "Life isn't one straight line. Most of us have to be transplanted, like a tree, before we blossom." And maybe it's because of that quote that I found Emma to be unsuccessful as a coming of age story. There were times when it reminded me of a Georgian version of Seinfeld: nothing changes. Emma's world is very small (though not idyllic—there are robberies and whatnot), and she never expresses even barest hint of a wish to leave or grow beyond it. She doesn't even move into Knightley's house—which is what, a five minute walk away?—after they're married! Emma may not be as wackadoo as her dad, but just like him she doesn't want anything to change, ever, and I would argue that includes herself. Sure, she realizes she's made a few mistakes over the course of the novel, but the ease with which she faces them and moves on makes me doubt she learned anything from them. For example, when she's like, "Mr. Knightley was right, I never should have befriended Harriet Smith!" it's because she thinks Mr. Knightley is in love with Harriet and she wants him for herself, not because she's had some sort inner revelation about how Harriet is significantly less happy now than she was before Emma condescended to notice her. Even in the last part of the novel she's still pretty selfish.

I also found Emma to be a more cynical novel than other Austen novels I've read. In Pride & Prejudice, you really get the sense that even though Darcy and Elizabeth got off on the wrong foot, they come to a true understanding of one another, flaws and all. With Emma, almost the opposite is true: she starts off as a matchmaker, believing she understands the human heart, and ends up thinking that no one can ever really know another human being. But that's cool, since she doesn't really care all that much anyway.

I'm glad I read Emma. It is a well-written book, but I don't think it will ever be my favorite Austen novel. Or even my fourth-favorite.

Incidentally, I listened to the Librivox version of the book narrated by Moira Fogarty, and she did a fantastic job. She gave every character his/her own voice and everything. I highly recommend it!

Download Emma by Jane Austen at Project Gutenberg|Librivox|GirleBooks
Posted by Heidenkind at 4:00 AM