Beyond Good and Evil by Friedrich Nietzsche 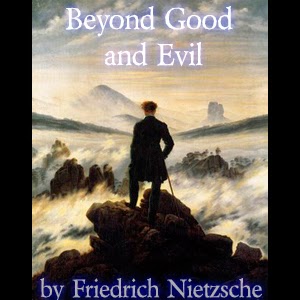 
“To recognise untruth as a condition of life; that is certainly to impugn the traditional ideas of value in a dangerous manner, and a philosophy which ventures to do so, has thereby alone placed itself beyond good and evil.”

In this work, Nietzsche lays the foundation for thought that the Christian notion of good and evil is based on a simplified yet hidden slave morality.  Nietzsche, instead, claims that the philosophy of “will to power” (I got tired of this phrase by the end of 158 pages, let me tell you) is all the morality that an individual needs.

Nietzsche talks of good and evil not as opposites, but basically as on a spectrum that all people lay somewhere on and often drift along at different times in their lives because of various experiences.  He also argues that religion is not the basis for morality, an argument that is still being fought today.   The concept of “will to power” is a complex one, but can be simplified as the main driving force in humans, whatever that force may be, because “a living thing seeks above all to discharge its own strength – life itself is will to power.”
He argues who are we to suppose that there is an essential opposition of “true and false”, or good and evil?  “There is no such thing as moral phenomena, but only a moral interpretation of phenomena.”  I found myself at turns confused, disagreeing, and nodding along in agreement while reading this.  One thing Nietzsche does is make you think and consider and you will be a deeper person for having read him.


Nietzsche is not easy to read.  I had to take my time, read along with the Librivox recording, and then re-read it again.  I took notes as I read and after finishing the book, I took some time off before going back and re-reading my notes.  It has taken me a long time to even figure out how to write a review of Nietzsche’s philosophy.  The task is as daunting as you would expect.  I recommend just giving him a try because as daunting as Nietzsche is, I feel better for having taken up the challenge.
Posted by Becca at 6:55 AM