The Blue Castle by L.M. Montgomery 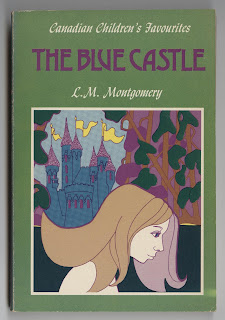 Review:  I went into Lucy Maud Montgomery's The Blue Castle thinking that I would absolutely love it.  It's about Valancy Stirling, a 29-year-old single woman (just like me!) who is often nitpicked by her family for being single (just like me!) and has never really rebelled or stood up for herself in her whole life (ok, our similarities end there).  One day, she has a great pain in her chest and learns from her doctor that she has a fatal heart condition, and will live at most one more year.  Valancy looks back on her life and is thoroughly unsatisfied with it.  She firmly decides that, if she's only got one year to live, then she might as well Live it Large, and so sets out to tell people exactly what she thinks and do exactly what she wants to do.

Refreshingly, Valancy is a very nice person.  So when she tells people what she thinks and does as she pleases, it's all quite a lot of positive things.  She finally stands up for herself, points out to her relatives just how absurd they are, and sets off to nurse a dying girl.

I grew up loving L. M. Montgomery's Anne of Green Gables series, but they are a little... saccharine.  The Blue Castle has characters that gasp when Valancy says "darn," think that jokes about ankles and calves are indelicate, and generally live in a complete bubble.  But The Blue Castle confronts hard realities, too.  There's a woman ostracized by the town because she gave birth to an illegitimate child, and Valancy becomes ostracized, too, by associating with her.  There is alcoholism, though it's presented in a more humorous than dangerous light.  There's the fear of a woman left on her own, confronted by a much larger and angry man.  And there is the more subtle, but just as difficult, reality of being an unmarried woman in a small town that defines women by marital status.  I loved that Montgomery chose to touch upon all of these issues in this novel.  And I loved that Valancy's rebellion was good and kind and very personal, not ridiculously overblown for shock value.  So often, women who rebel in literature are presented as caricatures- as females who are so sick of riding sidesaddle that they buy a man's riding suit and prance through town wearing it, just to piss everyone off.  I hate that.  But Valancy isn't like those women at all.  Everything she does, she does because she wants to, and because it makes her feel better about herself, and I loved her for that.

However, I didn't love this book.  I must say that I thought Valancy was pretty whiny at the beginning.  She wasn't whiny out loud to her family, but she was whiny in her mind.  There is an entire chapter in which she lies in bed, listing out the many grievances she has had in life, from early childhood to her 29th birthday.  I mean, really.  Is someone who remembers all those slights and punishments likely to become an entirely carefree, confidently happy person just 24 hours later?  It seemed unlikely to me.  I understand that all these instances were pointed out to us to show us just how downtrodden and put upon Valancy was in life, but it only served to make me think that she held grudges for a long time.

I also didn't like the very protracted ending of the book.  Really, you know where the book is going, and that it will get there eventually, so I don't understand why Montgomery insisted on drawing out a misunderstanding between Valancy and the Romantic Interest as long as she did.  I think it was supposed to be the point of tension and drama in the book, but I can't imagine that anyone thought the book would ever end differently than it did, and so instead of creating tension, Montgomery just drew out the story too long.  At least, in my opinion.

But overall, this book was fun reading, and I'm sure if I had read it when I was younger, I'd have fallen in love with it.  Valancy is the sort of heroine you cheer for, with beauty from within that makes her much more attractive on the outside, with intelligence, kindness and a great sense of humor, with a go-get-'em attitude that is impossible to resist.  I loved how she went after what she wanted, regardless of the consequences, and made her life.  It's a great story of a woman taking control of her own destiny, rather than being a passive participant in her own life.