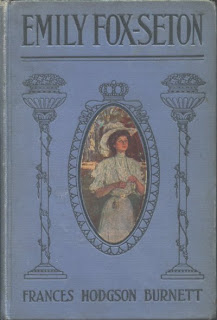 Review:  UGH.  This book disgusted me on so many levels.  I couldn't even get through it because I was so heavily offended by the blatant racism present here.  This is actually an omnibus of two books- The Making of a Marchioness and The Methods of Lady Walderhurst.  The Making of a Marchioness is the better of the two books (better = less offensive), but it's an odd one.  The heroine is described many times as being not very clever, overly naive, and somewhat ridiculous in her enjoyment of doing good turns for other people.  Emily Fox-Seton is far too saint-like for my tastes, and Burnett is none too subtle when describing her.  A few quotes:

"She did not know she was humble-minded and of an angelic contentedness of spirit."  Of course she didn't.  Because when you are ANGELIC, you must be completely blind to the fact.

I think you get the idea.  The book is liberally littered with phrases and comments like these, in which Emily Fox-Seton is described as being angelic.  But that is not enough.  She is also, of course, absolutely beautiful, even though she is thirty-four years old.  And even though she is poor, she has exquisite manners and dresses so well that no one would ever know that she had no money.

Already, Emily of the last name-dash-other last name was getting on my nerves.  But I persevered through to her happy ending, in which she married, as you can imagine, a very rich and kind (though also not very clever, as Burnett unceasingly points out to us) marquis.  I hope I didn't give too much away there, but quite frankly, the title gives it all away.  Don't be jealous of Emily, though, because the marquis, too, is not particularly clever.  He is described as being not that handsome, not that tall, not that aristocratic, and not very memorable.  He's really just rich and polite.  What made him supremely unattractive to me was the ridiculous habit he had of wearing a monocle that magnified his eye.  In fact, he wore the monocle while he proposed to Emily.  Which makes it impossible to take the man seriously, marquis or not.

So.  The first book was overly saccharine and monocle-infested, but somewhat bearable, if only because it made so starkly clear how difficult life for a single woman could be in the early 20th century.  Emily really did live in daily fear of The Future.  How would she provide for herself in old age?  Who could she depend on?  There was so much she couldn't control, but she always tried to present a cheerful demeanor to others.  I also like that this book was not a romance, exactly.  Emily is grateful to the rich people in her life for being generous towards her, but she holds no illusions about her own life.  She clearly is grateful to the Marquis for saving her from a life of scrimping and saving, but theirs isn't a marriage of passion or extreme feeling- they marry each other for comfort, and Emily feels more gratitude than anything else and seems to view her lover as more a benefactor that she wants to please than anything else.

I am confused by the message that Burnett was trying to share here.  Was she saying that very beautiful, poor (white) women who let everyone else walk all over them and are grateful for it are likely to win the attention of a really rich man in the end?  Because I am not on board with that message.  I think she was trying to convey a theme of "The meek shall inherit the earth," but I think she made Emily a little too perfect and idealized to get that across in a manner that seems realistic to her readers.  Still, I was glad that Emily ended the book content.

BUT THE SECOND BOOK.  My God!  Perhaps I was more sensitive to the racism because I am Indian, and the racism was against Indian people.  But no, I think I would be offended on anyone's behalf because it was just so ignorant and horrible.

First, Burnett refers to Hinduism as an "occult" religion.  All Hindus know spells and apparently use those spells to kill other people.  (Using a more direct method is too obvious for us, I guess.)  This was extremely disturbing for me to read, for obvious reasons.  But I was also upset because it reflects a complete disregard for the culture.  Burnett fell completely into stereotype (and I am not sure which stereotype, or perhaps stereotypes against Indians have changed drastically over the past century).  She didn't give the religion or culture any respect in this novel that features two Hindus as fairly prominent characters- these characters are also, as far as I got (which, admittedly, was not far), pretty horrible and shady, vindictive women.  One is proven to be horrible because, of course, she rejects the offer of a Bible and sticks to her "occult" ways.

The point at which I stopped reading?  When I got to the part in which Emily Fox-Seton's loyal and kind and good (and white) maid tries to warn her kind and forgiving and beautiful (and white) mistress that not everyone has good intentions towards her:  "Ameerah," wailed poor Jane, "White ones have no chance against black!"