Review: THE AFTER HOUSE by Mary Roberts Rinehart 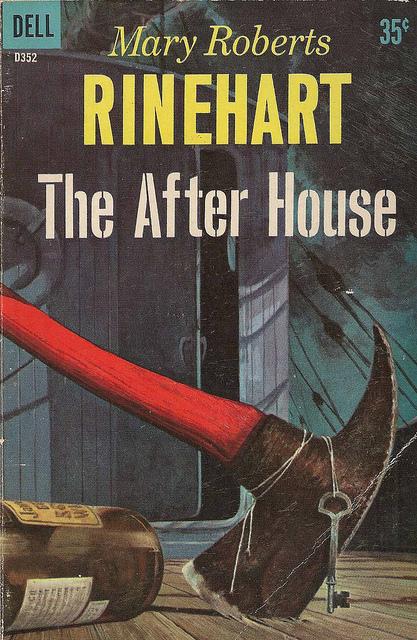 Ralph Leslie came down with typhoid only a day after graduating from college. Still weak from illness and with only seven dollars to his name, Leslie's friend sets him up with a summer job on a yacht. There's the forecastle, where the crew (including Leslie) sleep; and the after house, which is where the owner of the yacht and his friends have their rooms. Things seem calm on the surface, but tensions are clearly brewing in the after house, due mainly to the owner's endless drinking.

Then one night, three people on board are murdered, chopped to death by a silent, axe-wielding murderer. Trapped on a small vessel and weeks outside of port, everyone wonders who they can trust and who will be next.

Things I learned from The After House:
Honestly, I have mixed feelings about The After House. For the first half I absolutely loved it. Mary Roberts Rinehart's writing was so sparse and perfect, and I was completely drawn into the story. Then the murders take place and they are SO. CREEPY. First everything is fine, if a little tense; and then all of a sudden there are dead people all over the freaking place in little pieces! Not only that, but no one sees or hears anything, even though they're right next door. It's like Lizzie Borden came back from the dead and is all, "I'm on a boat! *chop chop chop*"

In the second half, though, the pacing started to go off, and inconsistencies in the story began jumping out at me. I expected Leslie to solve the murders on board the ship as they made their way back to port, which would have kept the tension high and offered an elegant conclusion: roll into US waters, show the authorities the culprit, and disembark. Instead, Leslie does very little investigating and moons over a girl, who seems really sketchy. They pull into port with the murders still unsolved, and then everything we already know is retold in court. Basically the story lost all momentum at that point, and the conclusion was riDONculous.

It's still a pretty good book, though, because it's by Mary Roberts Rinehart. I have to wonder if Rinehart herself was a teetotaler; there's a definite presentation in the book about the evils of alcohol, what with the owner of the yacht going into delirium tremens and Leslie dumping all the alcohol overboard. Before that even happens, I was thinking the after house had to be a metaphor for something--either success or the American dream--and Leslie's face is pressed against the glass throughout the entire book. Leslie himself never imbibes, and Rinehart definitely contrasts his behavior with that of the thirstier characters.

The women in this novel are also really interesting. When the murders take place, to me they seemed like the obvious suspects (well, there were some other obvious suspects, but they were TOO obviously obvious, if you know what I mean). The ladies had the opportunity, and come on--people are hacked to death with an axe feet from where they're sleeping and they don't hear anything? Way suspicious. But the men folk never consider one of the women might be the killer, even though they order everyone around, defend themselves with guns and knives, accuse random people of the murders for the sole purpose of throwing suspicion on them, and attempt to destroy evidence. These ladies keep it real, yo. It was extremely frustrating that the thought one of them might be a homicidal maniac never even crossed Leslie's mind.

The After House isn't as good as The Man In Lower Ten (review here), and I probably wouldn't recommend starting with it if you haven't read Rinehart before; but it was pretty damn creepy, and had a deliciously claustrophobic atmosphere, so I think it's worth reading for that.


Read The After House at Project Gutenberg
You might want to know: there are some racial slurs in this book.