Review: THE POISONED PEN by Arthur B. Reeve 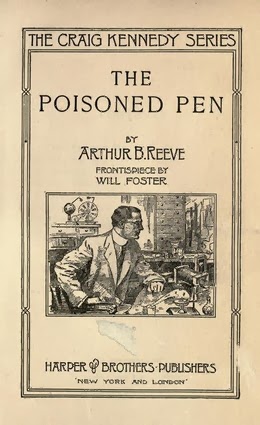 
"Professor" Craig Kennedy (what exactly he's a professor of I don't know—his first name might be professor) and his reporter friend/sidekick, Walter Jameson, are on the case of a string of mysterious crimes in this collection of short stories.

Someone on Goodreads described Craig Kennedy as "A poor man's Sherlock Holmes," and that's fair—but isn't that really true of 70% of detective fiction? Kennedy and Jameson are definitely "inspired by" Holmes and Watson; but even if the premise isn't very original, I found the short stories in The Poisoned Pen to be unusual and entertaining.

Admittedly, part of the reason why I liked The Poisoned Pen so much had nothing to do with the book itself, but the narrator of the audiobook version I downloaded, Elliot Miller. He was awesome! He gave all the characters their own voices, including Kennedy, who spoke like an olde-timey movie actor. The fact that Kennedy talked like Cary Grant was something I totally got a kick out of, and Miller was spot-on at reproducing that throwback Mid-Atlantic English accent.

I also really liked how women were treated in The Poisoned Pen. Not that it passes the Bechdel Test or that I would ever describe it as feminist or anything, but the female characters Arthur B. Reeve introduces are well-rounded human beings with their own motivations, NOT stereotypes or tropes (what a concept). For example, in "The Campaign Grafter," there's a suffragette who's sweet, fashionable, and idealistic. In "The Yeggman" (which I guess is a burglar?), one of the suspects is a woman who chews Kennedy out when he accuses her of trying to commit fraud. Instead of dismissing her as "hysterical" or "difficult," Kennedy admits he deserved the ass chewing and apologizes to her. And in "The Firebug," Kennedy solves a crime using handwriting analysis, concluding the writer of a series of letters is a woman. This kind of thing happens all the time in detective novels and on TV shows (I'm looking at you, Sherlock), and it normally pisses me off because it promotes ideas of gender essentialism (she checked her nails a certain way, she must really be a man!). But in The Poisoned Pen, Kennedy takes care to explain that determining gender based on handwriting is only accurate about 80% of the time, and the reason men and women tend to write differently has to do with the types of professions they gravitate toward and the amount of writing they do, NOT anything to do with their gender per se. So okay, Kennedy, I'll give you a pass on that one.

As for the mysteries themselves, some of the solutions in The Poisoned Pen were SO BIZARRE, I can't even. In one, Kennedy concludes the criminal disguised himself by cutting off the tips of his fingers and REGROWING THEM to produce new fingers (and thereby different fingerprints). Totally plausible you guys. In another story, Kennedy brings someone back from the dead. Literally. And then there was an instance where a doctor avoids dying from cyanide poisoning by washing out his stomach with hydrogen peroxide and then injecting said hydrogen peroxide into his bloodstream. LIKE, WHAT?

That being said, I found the bizarro plot points more amusing than annoying. It's kind of entertaining how Kennedy uses devices of "the future" that seem very quaint and odd now.

Not that all of the stories are great (the last three are kind of a drag), but for the most part I'd recommend The Poisoned Pen to anyone who enjoys mysteries. And definitely check out Librivox's audiobook version if you're into that sort of thing!

Download The Poisoned Pen by Arthur B. Reeve at Project Gutenberg|Librivox
Posted by Heidenkind at 11:22 AM