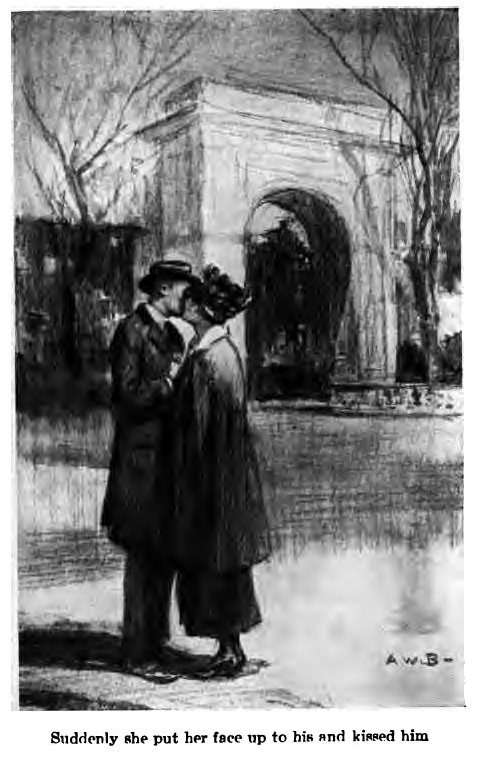 Topics: love, free will, battle of the sexes

Ambrose is a writer living in Greenwich Village, right on the edge of Washington Square. Despite the fact that he rarely has two pennies to scrape together, he has a fine wardrobe, wonderful friends, and only writes when he feels like it. Ambrose is living the dream, in other words. But when he adopts an orphan named Sonya (or is it the other way around?), Ambrose can sense his glorious life slipping away into one of conventionality and obligation. Will Ambrose be able to hold on to the life he wants while still doing the right thing?

Books like I've Come To Stay are the entire reason I started this blog. This novel is totally obscure and completely delightful, and I can't wait to tell everyone about it! In tone it reminded me of Gigi, or perhaps a 1910s American version of Notting Hill. In other words, I loved the hell out of it.

I've Come To Stay is a unique take on the romantic comedy. First of all, the people that populate it are fun and quirky, as one would expect from a book set in Greenwich Village. I'm a total sucker for stories that capture avant-garde communities and time periods like this, and I've Come To Stay does it perfectly. It's filled with people who've deliberately rejected the idea of being conventional and decided to become dancers, artists, writers, fashion designers, and political dissidents. They're not necessarily ambitious—Ambrose certainly isn't—except when it comes to freedom and self-expression. For instance, Sonya, the orphan who decides Ambrose is going to adopt her, was raised by her grandfather:


...to express her individuality fully. If she feels like catching a ride on a hearse, she does it. Instead of the Bible she has had Nietzsche; instead of the catechism, Max Stimer; instead of geography she was from the cradle taught to dance by a fat, old Italian ballerina...


Another example is Camilla, the woman Ambrose is sweet on. She longs to escape her "horrible blue-serge youth" in the country, and accordingly has no interest in settling down, getting married, or being a mother, especially to Sonya. Will Ambrose be able to convince her that marrying him doesn't mean becoming a boring and conventional hausfrau?

There's a theme of obligation and responsibility running through I've Come To Stay that intersects with a subtly played out battle of the sexes. As Ambrose's Aunt Adelaide tells him, "It's that awful maternal instinct run rampant." Adelaide's theory is that women make men miserable by treating their husbands and boyfriends like children. But men do the same thing to women, as Camilla discovers when she's caught in her own web of obligation.

I wouldn't call I've Come To Stay a strict romance—most of the scenes and storylines have to do with Sonya messing up Ambrose's life, not the relationship between him and Camilla—but it is SO, SO FUNNY. The dialog between Ambrose and Camilla is sharp and clever, and Ambrose himself is droll and completely charming. His interactions with Sonya are also pretty amusing, since she's an insane, tiny drill sergeant ("When I'm one minute late to school I feel as if I had wasted my whole life") who's constantly trying to get him to toe the line.

When I got close to the end of I've Come To Stay, I honestly wasn't sure if Camilla and Ambrose would end up together, and I was more than a little worried they'd both settle down and decide to "grow up" or become normal. This novel could have gone in so many different directions, but the conclusion Mary Heaton Vorse writes is absolutely perfect and delightful.

If you like comedies, romantic or otherwise, I really hope you'll give I've Come To Stay a try. I loved it and predict it will be one of my favorite books of the year. I want to read all of Vorse's other books now!


Download I've Come To Stay: A Love Comedy of Bohemia by Mary Heaton Vorse at Archive.org|Librivox
Posted by Heidenkind at 4:00 AM