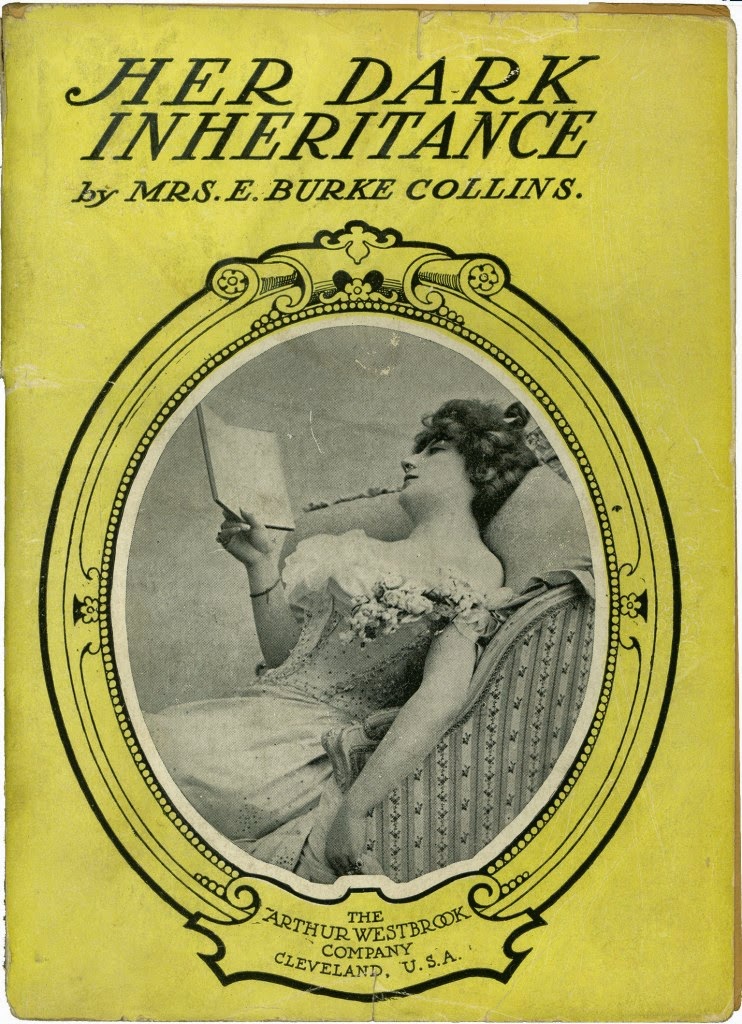 Topics: Love, secrets, beauty, economics, sins of the father, forgotten for a reason

On a dark and stormy night, Beatrix Dane is abandoned at the offices of Dr. Frederick Lynne, with a note promising an allowance for the doctor and his family if he raises the baby as his own. But when the money stops coming 17 years later, Beatrix faces resentment from her evil step-mom and -sister, as well as (even worse!) a horrible wardrobe. When a dashing cousin of Mrs. Lynne, Keith Kenyon, arrives on the scene, Beatrix is sure he's her prince charming. But Mrs. and Miss Lynne have other plans, especially after Dr. Lynne dies. Will Beatrix and Keith ever be together? And what was up with Beatrix's mom and dad?

Her Dark Inheritance is one of those books where being beautiful=good and unattractive=horrible person. Case in point: Beatrix is a shallow little bitch, yet I'm supposed to root for her because attractiveness. Mmmr, no. Keith also falls in love with her, seemingly just because she's beautiful. Meanwhile, Beatrix's "sister," Serena, is vilified largely because of her looks. Every single time she's mentioned in this book, the author takes care to point out that she's "ugly," "not very attractive," "ungraceful," and so on. Yet character-wise there doesn't seem to be much difference between Serena and Beatrix; at least Serena appears to be marginally more intelligent.

This would be bad enough, if I cared even a little bit about the characters or felt like the story had any connection to reality at all, but I didn't. I did like the beginning of Her Dark Inheritance, in a this-book-is-going-to-be-really-cheesy! sort of way, and I liked that it was clearly framed as a fairy tale (at one point early in the book, Beatrix thinks, "Oh, dear! I wish my fairy prince would come!"–literally, that is a direct quote–and a paragraph later Tall Dark and Handsome rides up on his trusty steed), but the story quickly descended into over-the-toppiness with a love triangle between Serena and Beatrix, and Beatrix going to live with some distant relative, who ALSO was involved in a love triangle in his youth and his now seeking revenge through Beatrix and Keith. It reminded me of Wuthering Heights in a way, although I gave marginally less fucks and thought it was way more stupid than Wuthering Heights, a challenge (not a fan of Wuthering Heights, incidentally).

And then there was the writing. Oh lordy lordy. Her Dark Inheritance is filled with long, tortured sentences that contain a whole lot of tell and not show. Another reason why it was impossible to connect to the characters on any level.

In the end, despite all the gossipy, juicy drama going on, I was really bored. If I had been reading the book I'd have skimmed to the very end; but since I was listening to it on audiobook I just DNF'd it.

But here's an interesting thing I discovered while I was trying to figure out when the heck Her Dark Inheritance was published: Mrs. E. Burke Collins was a very successful writer of dime novels for women. This was apparently a thing. A passage in a book I found on Google Books described her as, "one of the small band of women writers who earn more than $6,ooo a year." And says that, "Mrs Sharkey [Collins' legal name] is the only professional story writer in the far South and her salary is larger than that received by any other person in the state of Louisiana not even excepting its State officials."

Hard to believe. There were a bunch of other female dime novelists, too, of course. The American Women's Dime Novel Project contains some hip, retro covers from women's dime novels published between 1870 and 1934, but only a few links to where you can read them online and no discussion or critique of the books themselves, which is a bit disappointing.

There's also this article by Deidre A Johnson on Collins' short story, "Dare the Detective," and how it drew from her life experience.

Overall I get the impression Collins was following in the footsteps of Anna Katharine Green, only she wasn't as good of a writer. But I would be interested in exploring more dime novels from this time period, as long as they're not by Collins. Do you guys have any recommendations?