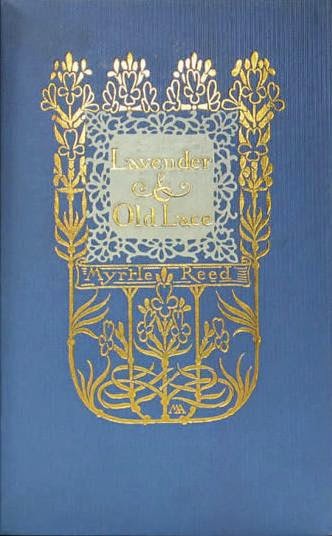 Ruth, a big city journalist, travels to a small coastal town to visit her long-lost Aunt Jane. When she gets there, however, she finds Aunt Jane has left abruptly for a trip abroad. The only thing she sends Ruth is a mysterious letter instructing her to light a candle in the attic every night. Because no story ever began with, "And then she minded her own business," Ruth starts poking around. Does Aunt Jane leave the candle in the window for a long-lost lover? Or does it have something to do with her aunt's BFF, Miss Ainslie, who super duper loves lavender?

Someone on Goodreads described Lavender and Old Lace as Anne of Green Gables grown up, and that's a pretty good description of the feel of the book. Everything is quaint and country; there's not a lot of conflict going on; and the obvious love interest is REALLY obvious. I'm not a huge fan of Anne of Green Gables (I watched the mini-series on PBS like everyone else but never had any desire whatsoever to read the books, which should tell you all you need to know there), but I found myself charmed by the story in Lavender and Old Lace anyway. Up until the final quarter of the book, that is.

The positives first: I really liked Ruth. I liked that she was prickly and standoffish and knew what she wanted. She kind of reminded me of Lady Mary from Downton Abbey, actually, if Lady Mary had grown up as an orphan in the US rather than as a British aristocrat.

I also liked Carl Winfield, even though his internal monologue was interminably annoying and I had to roll my eyes when he showed up because it was COMPLETELY OBVIOUS this was the guy Ruth was going to end up with. No sense of narrative tension or mystery at all. She's a journalist, he's a journalist. She's the only single female under forty who can read within a 20-mile radius, he's the only single male under forty who can read within a 20-mile radius. You get the picture. The saving grace was Ruth's prickliness matched against Winfield's earnest charm–they did have chemistry and I enjoyed their scenes together, which had plenty of snappy dialog.

So I was liking Lavender and Old Lace in a lackadaisical sort of way, up until Aunt Jane returned from her travels. That's when things started getting hairy for my inner feminist.

See, Ruth was right and Aunt Jane did have a long-lost lover, a sailor who proposed before leaving and promised to return and marry her. She believed him so much she bought a wedding dress and had it all fitted and everything! Thirty years later, he still hadn't shown up. Then right before Ruth's visit, what should Aunt Jane hear but that her beau was living, unmarried and unconcerned, in Italy. I'm sure we can all imagine her reaction.

Instead of falling into a pity spiral, Aunt Jane hies off to Italy and drags the bastard back for her wedding. Go Aunt Jane!! But Myrtle Reed apparently doesn't think a woman who Gets Things Done and goes after what she wants is a good thing. Reed consistently presents Aunt Jane as a foolish, jealous, self-righteous, and ridiculous harridan, and her now-hubby as the poor hen-pecked man who has to put with her.

This would be bad enough, but Aunt Jane is noticeably contrasted against Miss Ainslie, whose story is almost exactly the same: she also fell in love with some loser sailor who promised to return from the sea and marry her. ("Oh Brandy! You're a fine girl! What a good wiiiife you would be. But my life, my love, my laaaaaaaady is the sea...") Three guesses as to how that turned out.

Miss Ainslie continues to wait and wait for decades, her love for Sailor Guy never wavering Then Carl–who has the same last name as Sailor Guy and looks almost exactly like him, coincidence?–shows up and it becomes rather obvious that while she was waiting ALONE in the ass-end of nowheresville, her childbearing years wasting away, Sailor Guy married someone else and had kids. The bastard couldn't even send a note. Unlike Aunt Jane, however, Miss Ainslie's reaction to this turn of events is to give up on life. Seriously, she's like, "Whelp! Might as well die now." And Reed glorifies this! Miss Ainslie is continually described as saintly and beautiful and angelic, a woman to look up to and emulate.

And don't get me started on the scenes between Miss Ainslie and Carl, which all things considered are extremely weird and awkward. Miss Ainslie's always asking about him, and wondering if he'd find it "indelicate" if she wore low-cut dresses, and making him sit in her room at night and hold her hand. It's all crowned by the final scene, which is like something from Eyeroll Incorporated. Reed tries to convince us Miss Ainslie's feelings toward Carl are purely maternal, but I was not getting a mother-son vibe from those two. Nope.

Basically, by the end of Lavender and Old Lace I was fairly annoyed and a bit creeped out. It's not a bad novel–if I was a young girl I might have even found it credibly romantic. But then I wouldn't really recommend a young girl read it either, so. There are a lot of better books about spinsters out there, in my experience.


PS–I think the person who wrote the Wikipedia page for Lavender and Old Lace is a fangrl/boi:


It tells the story of some remarkable women, each of whom has a unique experience with love. The book follows in Reed’s long history of inciting laughter and tears in her readers through provocative prose.

Download Lavender and Old Lace by Myrtle Reed at Project Gutenberg|Librivox
Posted by Heidenkind at 12:58 PM