Review: THE PASSENGER FROM CALAIS by Arthur Griffiths 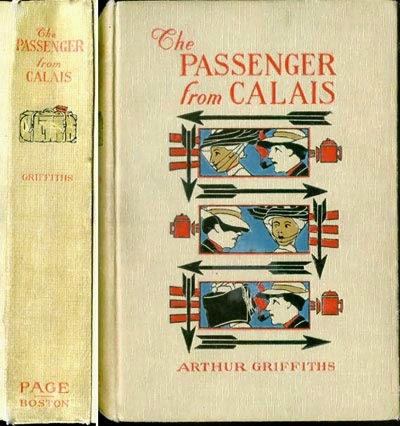 Lieut.-Colonel Basil Annesley, traveling to Lake Como for some R&R, hops aboard the train from Calais only to find that the train is completely empty of any other passengers, except for one small party consisting of a lady, her maid, and a baby. When he overhears the lady confessing to a theft, he decides she's bad news and that he's going to have nothing to do with her. After she tells him off for being a judgmental douche canoe, however, the Colonel abruptly realizes two things: 1. he IS being a douche canoe; and 2. he's totally in love with this woman and will do anything to help her, despite the fact that he still doesn't know who she is, what she stole, or why. Will the larcenous party be able to evade the private investigators on the lady's trail, and will the Colonel's feelings for her survive the trip?

I was so pleasantly surprised by The Passenger from Calais! It's a game of cat-and-mouse stretching across Europe in an extended chase that reminded me of Around the World in 80 Days–only better, because it includes several awesome female characters. There are fights, run-ins with the law, a slippery villain, double- and triple-crosses, and identity switches. The story takes an unexpectedly feminist turn in the middle, and I thought the ending was pitch-perfect despite an all-too-convenient death.

Even though the Colonel seems a bit dense at the beginning of The Passenger from Calais (his abrupt one-eighty in regards to the mysterious lady was enough to give me whiplash), as the book goes on he proves himself to be a clever and worthy adversary to the people chasing the woman. The story isn't only told from his viewpoint, however: we also hear parts of the story from Falfani and Tiler, the detectives, as well as the lady herself. The switching of viewpoints was confusing sometimes, especially listening to the book on audio, but that's my only real criticism of The Passenger.

The rest of this review is going to be spoilerific, so if you want to read The Passenger from Calais and still be surprised by some of the twists and turns, you may want to avert your eyes.

As for the mysterious woman on the train–whose name is Lady Claire Standish–I absolutely loved her. She's intelligent, capable, steady, and 100% principled even though she *did* steal something. The something that she stole is where the book takes that unexpectedly feminist turn I mentioned.

See, Lady Claire's sister, Henriette, married the vicious Lord Blackadder (cue Blackadder gifs), and several years later was just as unfairly divorced by him, resulting in a huge scandal. Naturally Blackadder got custody of their child, and made it known that he would never allow Henriette to see the little munchkin again. So, while her sister hied off to the Continent, Claire and her maid took her nephew from the house of Blackadder and planned to reunite mother and child in Italy.

So not only is the plot generated by the actions of two women, it centers around a woman's right to have access to her children as well as chose her own husband and maintain her own autonomy (Henriette was forced to marry Blackadder by her guardians, and the divorce hinged on rumors of infidelity sparked by her daring to socialize with men other than her husband). Not only that, but Annesley immediately and genuinely recognizes the women's plight as a just cause.

Blackadder is just as horrible as you can imagine. At one point he pulls the, "Do you know who I AM?!" card with a French official, which I think we can all recognize as a stupid move. The French judge's reaction to it, however, made the scene totally worth it.

And then there's Henriette. When we first meet her it's through the eyes of Colonel Annesley, and she's definitely a Difficult Woman. Completely unlike her sister, she is not cool, calm, and logical in the face of adversity. She's histrionic, temperamental, emotional, and refuses to listen to reason. Colonel Annesley thinks she's a harridan, actually, and when he's telling the story you can understand why Blackadder might have wanted to divorce her.

Lady Henriette is also very suspicious of men in general–understandable, all things considered, but not something I encounter a lot in older novels. Henriette and Claire are painfully aware of the power imbalance between men and women, and Henriette takes care to point it out (in the most annoying way possible, of course):

"Oh, how like a man! Of course you must have your own way, and every one else must give in to you," she cried with aggravating emphasis, giving me no credit for trying to choose the wisest course.


Why should she give you credit, dude? She don't know you. Lady Henriette is sick of doing what the goddamn patriarchy tells her to do. SICK OF IT.

What's interesting is that when Claire's telling the story, Henriette is still difficult and unreasonable, but much more sympathetic. And by the end Henriette redeems herself by taking the initiative to find the people who testified against her in the divorce trial and convince them to confess to the authorities they were bribed by Blackadder, which means everyone can to return to England.

Basically, Claire and Henriette each possess certain attributes of a classic femme fatale (that's certainly what I thought Claire would be when The Passenger from Calais started), but they're not the femme fatales–they're the heroines! Annesley really just provides a supporting role to their adventure.

Despite a few little too-convenient blips now and again, I really enjoyed The Passenger from Calais. I can imagine this book as movie directed by Wes Anderson, à la The Grand Budapest Hotel, and I loved that movie. I'd definitely recommend this novel!

Download The Passenger from Calais by Arthur Griffiths at Project Gutenberg|Librivox
Posted by Heidenkind at 6:38 PM