Review: THE PIRATES OF ERSATZ by Murray Leinster 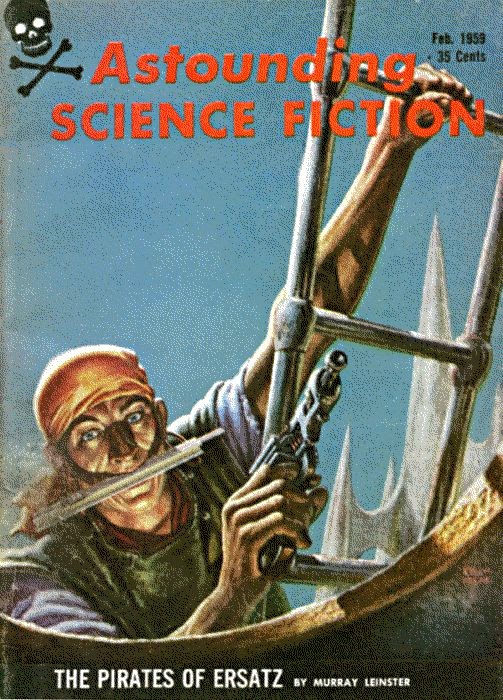 ersatz (adjective): 1. (of a product) made or used as a substitute, typically an inferior one, for something else; 2. not real or genuine.


Bron Hoddan is not a pirate, but he comes from pirates. Instead of following in his family's footsteps, he's decided to try to make his fortune honestly, as an engineer on the most civilized planet in the galaxy, Walden. Unfortunately, the people of Walden aren't interested in his inventions, and when Bron tries to press the issue, they arrest him for creating death rays. WHOMP WHOMP. Fed up with Walden, Bron escapes with the help of the most awesome ambassador ever. But it's only when he meets a band of outcasts like himself that he has an opportunity to accomplish great things, grow rich, marry some delightful girl, and be a great man... somewhere.

I decided to listen to The Pirates of Ersatz because it's narrated by Elliot Miller, the same Librivox narrator who read The Poisoned Pen. Also: Pirates! Who doesn't love pirates? Those lovable scamps. Even though these aren't "real" pirates, they certainly do act like them most of the time. That being said, The Pirates of Ersatz is mainly an adventure novel and coming-of-age tale: Bron goes to a wild, uncivilized world called Zan and discovers his place in the world.

Some of the more interesting parts of the novel are where the characters posit theories about civilization and economics that, despite the fact that they're coming at me from a serialized science fiction novel, I kiiiiind of buy into? Like, even if they're not true, THEY SHOULD BE. Here are some of my favorites:

"Do you realize," [the ambassador] asked, "that the whole purpose of civilization is to take the surprises out of life, so one can be bored to death? ...Government, in the local or planetary sense of the word, is an organization for the suppression of adventure. Taxes are, in part, the insurance premiums one pays for protection against the unpredictable."


"I tell y', piracy's what keeps the galaxy's business thriving! Everybody knows business suffers when retail trade slacks down. It backs up the movement of inventories. They get too big. That backs up orders to the factories. They lay off men. And when men are laid off they don't have money to spend, so retail trade slacks off some more, and that backs up inventories some more, and that backs up orders to factories and makes unemployment and hurts retail trade again...
"But suppose somebody pirates a ship? The owners don't lose. It's insured. They order another ship built right away. Men get hired to build it and they're paid money to spend in retail trade and that moves inventories and industry picks up. More'n that, more people insure against piracy. Insurance companies hire more clerks and bookkeepers. They get more money for retail trade and to move inventories and keep factories going and get more people hired.... Y'see? It's piracy that keeps business in this galaxy goin'!"


Okay, twist my arm, I'll take up piracy. There are similar passages about technology and engineering, since Bron is an engineer. If you're thinking they slow down the story, you'd be right. But there's not a lot of them, and they do become relevant later on.

Aside from Murray Leinster's economic theorizing, there's a lot to like about The Pirates of Ersatz. Both of the characters quoted above—the Ambassador and Bron's grandfather—are awesome, as is Fani, the woman who's obviously sweet on Bron (obvious to everyone except him). And then there's Bron himself—he's like a sci-fi version of Robin Hood (have I mentioned I'm a sucker for Robin Hood stories?). He's definitely a reluctant hero, but he can think himself out of nearly any situation and he uses his powers to steal from the rich and give to the poor. And hey, it's all insured anyway, right? The scene where Bron and his pirates land on Walden to raid a suburb is priceless. You kind of have to read this book just for that.

The Pirates of Ersatz is a fast, fun read with ironic overtones (obviously—it's a book about pirates that aren't really pirates, what can one expect?). It certainly won't change your life, but if you're in the mood for an adventure along the lines of A Princess of Mars by Edgar Rice Burroughs, I highly recommend it.


Download The Pirates of Ersatz by Murray Leinster at Project Gutenberg|Librivox
Posted by Heidenkind at 4:00 AM