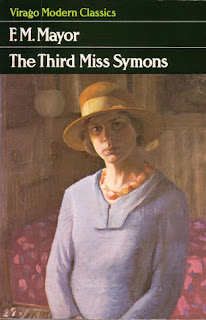 Review:  This is one of those books that seems to have been written to serve as a Dire Warning against certain types of behavior.  F. M. Mayor writes about Henrietta Symons, an awkward girl who grows into a hard-edged young woman who in turn becomes a querulous middle-aged woman who becomes an isolated old woman.  Henrietta has had a bad temper her whole life, and this clearly has disastrous implications on her whole life.

If this had been the whole point of the story, it would have been depressing enough to read, but it probably wouldn't have made it into the line of Virago Modern Classics.  But Mayor used Henrietta to comment on many aspects of Victorian life, particularly about the lives of women.  Henrietta grew up in a very comfortable home where she never had to worry about money.  Thus, she went to school and had no real hobbies, studied without learning much of anything, and then... not much else.  She never married, but she was never in need of a job.  She had a lot of time, but she had no interests.  She could manage a household if she needed to, but no one needed her to do so.  She could visit friends, but she had none.  Henrietta's life devolved into one of isolation and emptiness, mostly because she wasn't good at anything and had no ambition to try to be better.

Early in the story, Mayor points out that most Victorian women in their late teens and early 20s  graduated from school and then spent a few years doing nothing but worrying about clothes and attending parties (I find it hard to believe that all Victorian women were that vapid, but let's ignore that for now).  And then they got married and settled into their lives as wives, mothers and homemakers and things progressed according to their natural order.  But that didn't happen for Henrietta, and so when the party invites stopped coming and it became clear she wasn't going to marry, there was nowhere for her to go.  There was no contingency plan.  There were just years of emptiness before her, and she had to find ways to fill them.

In some ways this book was refreshing because Henrietta didn't seem like she really wanted to be married for much of it, she just wasn't sure what other options were available to her.  And her family didn't tell her that she was useless or unnatural for not having a husband and children.  But all of that was implied, really - Henrietta was unmarried because she was unlikeable.  If she had been just a little bit nicer, she would have been married and life would have been much better for her.  Never mind the fact that her married sisters all had sorrows and troubles of their own - they were obviously much better off.

This was a tough read, obviously.  Lots of subtle commentary about the state of the world and a woman's role in society.  Luckily, the narrator for this one was excellent and the story is very short, so I didn't have any trouble finishing it.  Think I will steer clear of the heavy-handed Victorians for a little while, though!
Posted by Aarti at 7:30 AM