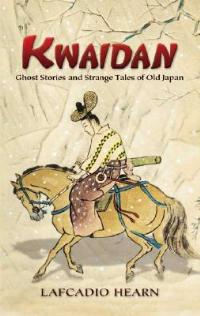 
Review:  I spent a lot of time scouring Librivox before settling on Kwaidan.  I was looking for books about non-Western countries that were written in English so that I could add some multi-cultural action to this blog!  I found two books that qualified in my first search, Kwaidan being one of them.  While it's not written by a Japanese author, Lafcadio Hearn did read a lot of Japanese texts and spend a good amount of time in Japan.  He also was a completely fascinating person in his own right.

Kwaidan is a collection of many short stories, fables, and folk tales from Japan.  One of the best parts of reading folk tales is seeing the similarities and differences that exist between cultures.  For example, many folk tales from around the world seem to address the cross-over from living to dead.  In this collection, the story of Hoichi the Earless is the one that most stood out - Hoichi is a blind monk who is a master musician and every evening, he is called to play for a lively lord.  But Hoichi soon learns that he has been led to the graveyard every night and that his life is in great danger unless he can outwit the ghosts that haunt him.

Another story I really enjoyed in this collection was "The Dream of Akinosuke," which reminded me a little bit of The Life of Pi, mainly because readers are brought back to reality near the end of a beautiful and lovely story and are left mystified as to what really happened.

I tend not to remember the details and intricacies of folk tales very well.  I always enjoy the act of reading them, but I don't remember much about them after the fact.  Even now, the stories shared in this collection are fading from my mind.  But they were a treat to read, and the narrators for the stories were good at telling their tales.

One thing that was a little odd about this book was that the last three chapters were not really folk tales - instead, they were about insects (butterflies, ants, and mosquitoes).  Hearn gives some context as to the superstitions around these insects and then goes off into somewhat random tangents on his thoughts about each of them.  I'm sure I would have appreciated this in a book on natural history or science or, well, insects, but in a collection of folk tales, it felt a little out of place.

Overall, though, I am quite happy with this selection - it was fun to read about things that go bump in the night in Japan and listen to stories that were quite foreign to me.
Posted by Aarti at 4:00 AM