I DARE you guys to read this book.

The Bannerworths are a wealthy English family. Then the daughter, Flora, is attacked by a creature she swears is a vampire. Quelle horreur! Meanwhile, a wealthy and mysterious stranger has moved into the neighborhood by the name of Sir Francis Varney. Could these two events be connected?

Varney the Vampire by Thomas Preskett Prest (sometimes attributed to James Malcolm Rymer, I don't know why) is basically your typical Victorian sensation novel, except with vampires. It reminded me of Lady Audley's Secret (review here), but it's worse. Soooooo much worse. There are conversations that run pointlessly in circles, endless scenes where nothing happens, action scenes with no purpose, and a lot of repetition and histrionics. It's absolutely terrible and SO DANG FUNNY. I think the nonsensical conversations between the Bannerworth brothers, which basically boil down to, "You don't know what you're talking about so shut it!" were my favorite. But the constantly repetitious dialog was also highly entertaining, as were statements like, "Even if I did see a vampire, and he bit me in the neck, I'd still tell him to his face he didn't exist!" Oooh la la, that guy is asking for it. 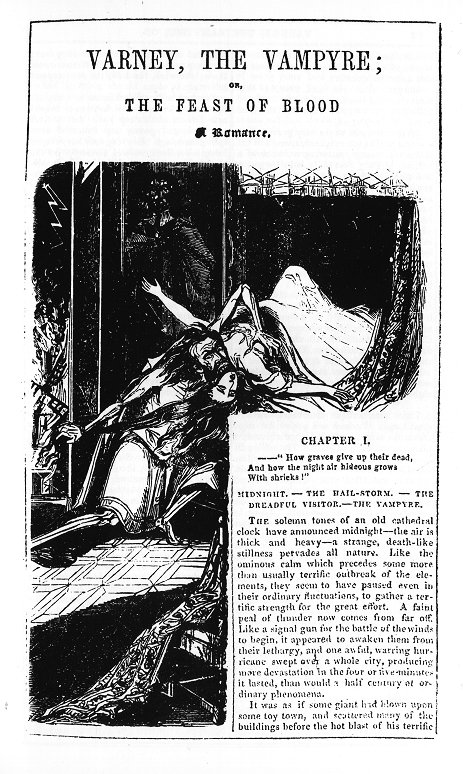 Um, do you think there might be some sexual connotations here?

Something you should know: this is a long-ass book. Just to give you an idea, the audio for Bram Stoker's Dracula is about 16 hours. Varney the Vampire is about 60 hours. Les Misérables is 63 hours. So basically this book is almost as long as Les Mis. But on the plus side, you can probably skim through more than half of it and be fine. Also, it's great to listen to on audiobook, because if your mind wanders, you don't have to worry about being too lost!

The problem is that even though this is a long-ass book, there are a lot of things that never pan out in it. For example, at the beginning of Varney, the characters think he's one of their long-dead ancestors, Marmaduke. But then it turns out he's Sir Francis Varney, and that storyline just kind of drops with no explanation. The author sets us up for scenes or events (see "If I did see a vampire," above), and these never come to anything, either. It's really kind of a mess.

As for the characters, they're all pretty stupid except for Varney. The poor guy! If he had any sense of self-preservation he'd stay away from the Bannerworths; but it's pretty obvious that he doesn't. Ye Olde Tortured Vampire.

Varney the Vampire is almost exactly like Dracula. Or perhaps I should say Dracula is almost exactly like Varney, since Varney predates Dracula by almost fifty years. I'm not saying Varney is the better book, buuuuuuuuuuuut Dracula's kind of a rip-off. As is Dark Shadows. Basically if you enjoy vampire fiction at all, you owe it to yourself to read this book, because it establishes all the tropes of the genre and it is HILARIOUS.


Download Varney the Vampire by Thomas Preskett Prest at Librivox|Project Gutenberg
Posted by Heidenkind at 12:00 AM