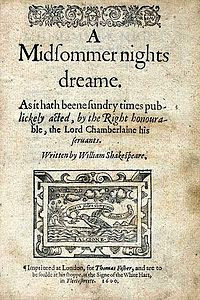 This was my first Shakespeare ever. Some friends warned me that is better experienced by seeing it on stage, but I found that reading the book and then watching the film adaptation worked well. I was able to go back, re-read and look online for definitions, which allowed to understand turns of phrase like “a mile without the town” or “come, recreant; come thou child”.

If I’d seen the play without reading it first I’d probably miss the images invoked by one of my favorite lines – Titania describing how she got the little Indian boy:

Reading the play also gave me the opportunity to witness what a marvelous “insulter” Shakespeare was. I'd heard rumors, but now I've seen it for myself and am very much tempted to memorize a few... just in case the opportunity to use them presents: “You minimus, of hind’ring knot-grass made”, “O me, you juggler, you canker-blossom, you thief of love!”, “Farewell, thou lob of spirits”.

I haven’t said much about the plot because it became a bit secondary compared to the words (that’s why you have re-reads, right?). Next time around I’ll pay more attention to the social comment on the balance of power in relationships or the loss of individual identity, but just this once, let me appreciate the language alone.


Ay me, for aught that I could ever read,
Could ever hear by tale or history,
The course of true love never did run smooth.

Lysander says this to calm Hermia, after her father forbade them to marry and the King threatened her with death if she disobeyed. Lysander’s basically saying that for as long as there has been true love, there have been difficulties, and I found that strangely comforting.

Bottom & Co.’s play: loved it. How very meta-fictional of Shakespeare (or maybe it was a common gimmick at the time and I’m giving him more credit than he deserves), and how funny their keenness to make sure the audience was not scared by the lion (it’s just a man playing a lion!), or of the scene where Pyramus gets killed:


(…) and for the more better assurance, tell them that I Pyramus am not Pyramus but Bottom the weaver: this will put them out of fear.

Watching the 1999 the movie adaptation after reading the play was a good idea. I not only understood better the comings and goings of the characters, but it was also fun seeing how often the actors used a tone different from the one I used when reading by myself.

Overall a great introduction to Shakespeare and a good starting point: a fun, quick read that still allowed me to appreciate why the Bard's language has been delighting readers and audiences for centuries.
Posted by Alex at 2:24 AM