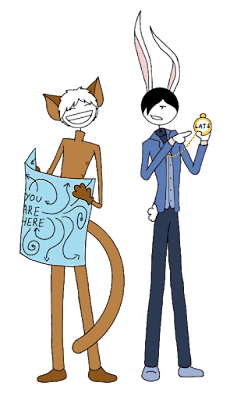 What is it with children’s books and casual endangerment of children?

Nothing HAPPENS to her.

Who the heck orders kids to be beheaded?!

Don’t even try to justify this one.

Then I won't. Summary time! Now, imagine you’re lying on the grass. The weather’s nice, but there’s nothing to do and you’re bored out of your mind. Suddenly, you see a rabbit. Well, nothing strange about that. BUT WAIT. It’s wearing a teeny tiny waistcoat. And takes out a pocket-watch. And complains about how late it is. What do you do? Go back to being bored? Of course not! After that rabbit! Right down the rabbit hole!

Ignore the fact that a rabbit hole shouldn’t fit a human at all.

A lot of logic has to be ignored and really isn’t the point in this story. Anyway. You drop lightly down, down, down into a place where nothing makes sense, things can change from one second to another, and everyone is either really rude or completely wrapped up in their own weirdness. But first you have to drink from an unknown bottle just because it tells you to.

The story is definitely creative. I don’t think you can find such.... effortless bizarreness in many other books. And there’s a LOT of bizarreness. The main character, Alice, just travels from one strange set-piece to another. Stop, something weird happens, move on.

It’s exhausting. Sometimes. The main set-pieces are great, absolutely creative imagery, but when even the transitions between them have to have something strange happening, you don’t get a chance to pause and take in anything. And some things just seem beyond pointless or just aren’t fun to read. The pointless puppy sequence, the idiot birds, the annoying mock-turtle, the awful, awful scene at the Duchess’s house which you should just skip over because it’s the stupidest-

I swear he likes this book.

This is definitely one of those books you really shouldn’t think too hard about. Which for Sharky is pretty much impossible.

So it doesn’t help when I’ve got to stop and start skipping over the bits I don’t like. But I put up with it because there’s stuff in there I’d happily revisit.

And there really is a LOT. A crazy tea-party, a royal court where everyone is a playing card, food and drink that makes you change your size, a disappearing cat, a court of law where nobody knows what they’re doing, a queen who keeps ordering beheadings but the king pardons everyone behind her back anyway so that’s okay. It also has a share of dumb puns which make me groan, but that’s why I love puns. And fun poems like The Lobster Quadrille and You Are Old, Father William. And genuinely funny moments like the cat appearing as just a head so nobody can figure out how to behead it. Seriously that part’s short but pretty funny.

Even the Duchess bit, as much as I hate it and skip over it every time, has a pretty funny start where the footman of her house just refuses to go inside because everyone’s so crazy in there. I don’t know, it’s such a mixed bag of stuff I REALLY don’t like mixed in with stuff I really love? But it's worth a go.

Honestly if I knew how to get out of it, I’d love to visit it. I guess that’s the criteria for visiting most fictional places. But to go there in place of Alice and just... be weird at people and see how they would react seems really fun to me. It’ll probably all end up the same though. Most of the people are really easily offended. Which makes Sharky a citizen of Wonderland.

Don’t make me punch you.

Download Alice's Adventures in Wonderland by Lewis Carroll at Project Gutenberg|Librivox
Posted by Heidenkind at 7:00 AM