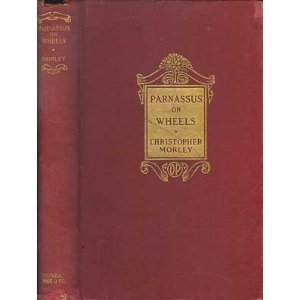 A fun novel about my favoritest of subjects – books and the love of them. Found somewhere on my travels around the interweb, this title popped up on list of fun classics to read. I am not familiar with either the author or the title, but the review looked good and I found it on Project Gutenberg. It’s a quick read, is rather a cross between a novel and novella, I think. Not quite long enough for one, not quite short enough for the other.


The basic plot line is of a sister and brother who both live on a farm in Massachusetts not too far from Boston. Set in the early twentieth century (I think), the siblings get on fine until the brother finds unexpected success as a best-selling author writing about the joys of living on the land. His sister is the one who bakes the bread, cleans and more or less runs the farm as the brother keeps going off on unexpected jaunts to “research” his books. This set up is annoying for the one who is forced to stay at home, and when one day, a mobile book shop – a “caravan of culture” -- shows up, things take a surprising turn. (The mobile bookshop is the “Parnassus on Wheels”, Parnassus being the name of the Greek mountain where the Muses would live).


As the sister ends up going on new adventures further afield and realizing that she has just as of a right of a happy life as selfish authorly bro, the reader can feel the blossoming of her character – of how much more she has to offer the world rather than be skilled at blacking the stove. Over the years, she reckons that she has baked about 15,000 loaves (an “anthology of bread” as she describes it in her bookish way), and so doesn’t feel that guilty about going off and leaving the bro to his own devices on the farm.


Going on this unexpected adventure frees up the sister:  “That’s where I learned that life still held something fresh for me – something better than baking … biscuits for [my brother]…”


Of course, things don’t sit well and the story twists and turns – it’s all very reflective of the burgeoning feminist movement of the time and questioning of gender roles. Very up-to-date issues, really, especially when you consider that it was written by a man in the 1920’s and it’s from the woman’s perspective.


As I mentioned, it’s a quick read and yet it covers a lot of territory the most notable of which was the ongoing adoration of all things literary – books, words, authors, the act of reading… All very suitable subjects for a book nerd such as I am.


It’s also a hopeful and optimistic book for how life can change and looking forward to the future. As the female protagonist reports, “Summer was over, and we neither of us were young, but there were great things ahead of us.”

Download Parnassus on Wheels by Christopher Morley at Project Gutenberg|Librivox|
Posted by lemonhead1 at 8:11 AM