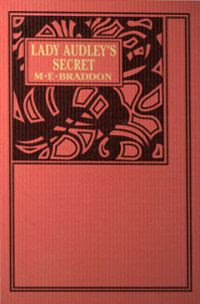 Lady Lucy Audley is the pampered, childishly innocent wife of Lord Audley. Could such a woman retain dark secrets and go to desperate lengths to keep them? Answer: probably, yes.

I love Lady Audley. And I kinda hate her. She's one of THOSE women--you know, the kind other women find really easy to hate, because she attracts all the men-folk, but as soon as you put her with a bunch of other women butter wouldn't melt in her mouth. Mary Elizabeth Braddon's descriptions of her as a beautiful blonde with a childishly innocent demeanor made Lady Audley seem like an evil Marilyn Monroe. At the same time, she's really smart (even though she doesn't act like it--perhaps that's her real secret) and I kind of admired her moxie. All the men wronged in the novel deserved whatever they got; and it's not like she didn't warn them, either.

This isn't the type of book where you have to guess at Lady Audley's secret--that's obvious by Chapter Two. Instead, the tension comes from waiting for the other shoe to drop. Add to that a woman, or several, who may be up to no good, and Lady Audley's Secret is rather Hitchcockian. I loved the suspense and the humor in the novel, especially from Robert Audley ("Don't be German, Alicia." LOL Still laughing about that, I have no idea why), who is pretty dang funny.

All that being said, once Robert Audley figures out the 411, Lady Audley's Secret loses steam. Robert spends a lot of time whining about why HE has to be the one to investigate, and even more time talking to himself about gender and social inequality. I'm all for equality, but I don't want to hear Robert Audley talk to himself about it for ten chapters, thanks. I also thought the conclusion was only possible because of inconsistencies with the character of Lady Audley herself--the point was that she was smart! Like, Irene Adler smart. But at the end, Lady Audley does a lot of stupid things she shouldn't have done if her character was consistent.

Still, I really liked this book. It's bordering on trashy, but it's super-fun and entertaining, and I got a kick out of the main characters. I'm glad I chose Lady's Audley's Secret to be my first Victorian sensation novel!