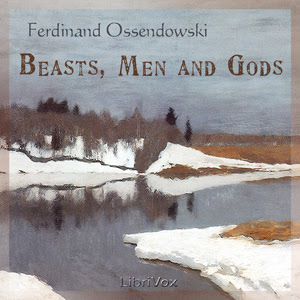 Pursued by Bolshevik Revolutionaries, Ferdynand Ossendowski, a Polish scientist, resolves to return to his family the only way he can: by traveling through Siberia into Mongolia and China, then back into Western Europe via the United States. Along this epic journey he encounters beasts, men, and gods, sometimes within the same person.

I normally don't go for memoirs, but the summary for Beasts, Men and Gods on Librivox described it as, "an epic journey, filled with perils and narrow escapes, in the mold of The Lord of the Rings. The difference is: it’s all true." A TRUE version of Lord of the Rings? This I gotta see. And there better be effing wizards.

While Beasts, Men and Gods isn't exactly Lord of the Rings, it definitely fulfills its promise as an epic journey--a very fascinating, well-told journey over a country Ossendowski calls "the land of mystery and miracles." Ossendowski had an established history of political dissidence opposing the Bolsheviks before this story began, and even spent time in a Russian prison under a death sentence until it was commuted to a "wolf ticket"--basically papers that prevented him from leaving the country or holding down a regular job, which was why he was in Siberia to start off with. He wrote a book about his time in prison called In Human Dust that Leo Tolstoy declared one of his favorites. 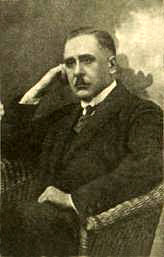 Ossendowski can and will kick your ass.


You wouldn't know any of that from reading Beasts, Men and Gods, however. Ossendowski doesn't give us backstory as to why the Bolsheviks are after him, just that he's visiting a friend and receives word soldiers have surrounded his house. With no other options, he escapes into the wilderness of Siberia and lives in the woods on his own for at least a year. Forgoing these details was a smart move on Ossendowski's part--it gives the narrative an everyman feel and underscores the horrors of the Bolshevik Revolution more effectively than if he'd turned the book into a political treatise. And Beasts, Men and Gods isn't really about politics, anyway; it's about a struggle to survive against the chaos of war and nature. Ossendowski wants the reader to feel as if all of this could happen to them, whether or not they're involved in politics, and he succeeds.

The first part of the memoir focuses on his time living more or less alone in Sibera, and it's the best part of the book. You know how the 1965 movie Doctor Zhivago has these incredible visuals that burn themselves into your mind, like the train car covered in ice so thick they have to hack their way through it? Beasts, Men and Gods is kind of like that. Ossendowski's description of the spring thaw is incredible, with the breaking of the ice sounding as loud as a roar and chunks of ice the size of boulders flying up from the river and flattening trees when they land. But the ice carries ugly things in its depths:


Watching this glorious withdrawal of the ice, I was filled with terror and revolt at seeing the awful spoils which the Yenisei bore away in this annual retreat. These were the bodies of the executed counter-revolutionaries... Hundreds of these bodies with heads and hands cut off, with mutilated faces and bodies half burned, with broken skulls, floated and mingled with the blocks of ice, looking for their graves; or, turning in the furious whirlpools among the jagged blocks, they were ground and torn to pieces into shapeless masses, which the river, nauseated with its task, vomited out upon the islands and projecting sand bars.

Yikes! It's easy to understand why Ossendowski was against the Bolsheviks, even though he never comes right out and says that he was.

The book slows down considerably in part two, when Ossendowski makes it into Mongolia and tries to travel into Tibet (with the goal of reaching the coast of India, where he can catch a boat back to Europe), only to be blocked by Chinese revolutionaries. Trapped, liked Mongolia herself, between two countries being taken over by communism, Ossendowski travels here and there, meets people, gets into skirmishes, is shot several times, and attempts to catch us up on Chinese-Mongolian politics. I'm not terribly interested in the politics, and the fights Ossendowski and his traveling companions get into start to feel repetitive. I began to wonder what the heck the point of all this was. But! The story picks up considerably in the part three, when Ossendowski meets Baron von Ungern-Sternberg, also known as the Bloody Baron. 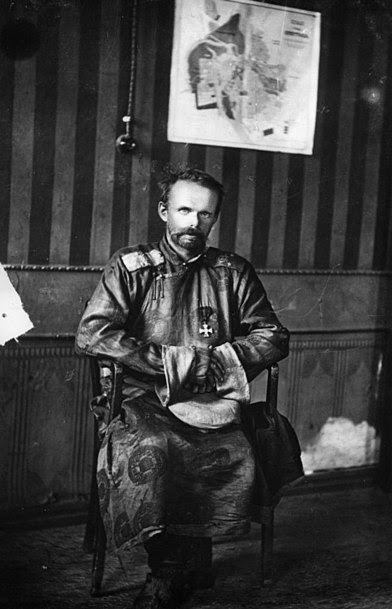 Baron von Ungern-Sternberg, 1921, in a Mongolian deel uniform with the Russian Order of St. George.

The Baron was a German national who became a general for the White Russian army (the royalist side fighting against the Reds, or Bolsheviks), and the guy was CRAY CRAY. He was an excellent general, but known to be ruthlessly violent as well as believing himself to be the reincarnated Mongolian God of War. For serious. The way Ossendowski describes him makes the Baron sound like a blonde Moriarty from BBC's Sherlock--the high-pitched laugh, the faux bonhomie and latent violence. Ossendowki is as frightened of Ungern-Sternberg as anyone, but at their first meeting he tells the Baron off and demands his respect. After that Ungern-Sternberg decides he's trust-worthy and brings him into his inner circle (Ossendowski apparently taught the Baron's troops how to make poisonous gas, but that is not mentioned in the book).

The Baron is a fascinating guy, and Ossendowki is clearly at once repelled and transfixed by him, as is the reader. Knowing what we know now, it's a little spooky at times how the Baron seems to be predicting WWII, a battle between good and evil, as he describes it. He also knows he won't see that battle, anticipating death at the hands of his own commanders, which was exactly what happened.

Ossendowski himself is an interesting guy, too, and he only gets more interesting as his journey goes on. In his normal life he was an academic and scientist, studied under Marie Curie, and taught classes on physics and chemistry at universities in Russia and Poland. As with politics, he never gives us details about his past, but you can tell he's a scientist just by the way he describes things such as the environment and animals in Mongolia. At a few points in the book he comes across strange phenomena or legends and his reaction is, "The locals believe this is caused by evil spirits, but clearly it is a chemical reaction to blahity blah blah." And yet, one gets the impression that there's also a part of him that buys into the mysticism of Mongolia. He believes true prophecies were made about him, and he never attempts to explain Baron von Ungern-Sternberg's belief that he's a god as delusion or narcissism. The last part of the book, which takes place in the palace of the Living Buddha and describes its treasures and prophecies, are the words of someone who's drunk the kool-aid, not a scientist.

And Ossendowski is SMART. I'm not talking book smarts, either, though obviously he is that. He can read people, and that saves his life more than once. He sizes other men up in seconds and then somehow knows what to say or do to get the reaction he wants from them or inspire their trust.

Which leads me to the end of the book, and the reason why I hate memoirs. Because while I don't doubt the veracity of what Ossendowski wrote (I have no reason to--it's absolutely incredible, but people have incredible and unbelievable experiences during war, as I know from stories my own grandparents have told me), he clearly isn't telling us everything. Even if I hadn't Googled him, I'd still know he was being evasive about certain parts of his journey, especially in part four. That's where I started to go, "What the hell?" because he NEVER says how he gets out of Mongolia. One would think that would be a good conclusion to the story, if only just a sentence to mention it, but there's absolutely nothing. Why? According to Wikipedia, he got a position as a diplomatic envoy to Japan, and from there traveled to the US, supposedly hiding treasure he stole from the Bloody Baron along the way. Is that why Ossendowski skips that portion of his journey entirely? I don't like to think that Ossendowski would steal from anyone; but from the start of Beasts, Men and Gods, he edits out certain facts in order to make the impression he wants, so it's not beyond the realm of possibility that things occured in those final days that he decided were best left unsaid--not even glossed over, but skipped entirely.

Why not just write a fictional novel about it, for heaven's sake?

In any case, it seems appropriate that Ossendowski's journey through "the land of mystery" ends with a mystery for the reader. I think this memoir is incredible, thought-provoking, awe-inspiring, and I definitely think it's worth checking out.


Read Beasts, Men and Gods on Project Gutenberg|Librivox (Mark Smith narrates and does a fabulous job)
Posted by Heidenkind at 12:00 AM