Review: Letters on an Elk Hunt 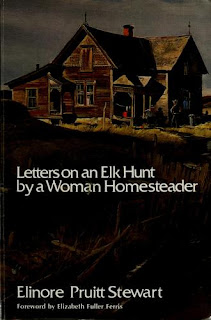 Review:
I read Letters of a Woman Homesteader last year and really, really enjoyed it.  I fell in love with Elinore Pruitt Stewart (except for the disturbing, lightly-treated racism she sometimes had a tendency to display) and her ability to find humor in so many of life's everyday situations.  Also, the woman is able to shoot her own dinner and ride into a snowstorm on her horse, which is pretty amazing.

Letters on an Elk Hunt is a sequel to Letters of a Woman Homesteader.  It's a series of letters written in 1914 from Elinore Stewart to her lifelong friend.  This book is much shorter, though, as it only describes Elinore's life over a span of several weeks relating to the build-up to, experience of and falling action after an elk hunt.

I mentioned in my previous review that I wasn't sure how much of the story Elinore related was fact and how much was fiction.  This came even more to the fore in Letters on an Elk Hunt, just because every single story arc that Elinore introduced was completed very neatly in the span of the book.  For example, there is one mysterious but very kind girl that travels with the hunting team for quite a while.  Everyone likes her but knows very little about her (a fact that Elinore sets up very well in early letters).  But then, conveniently, just before this girl is to leave them, she takes Elinore and another woman aside and spills her guts to them, telling her about why she came west, what she hopes to do and who she hopes to find.  And then, the next day, all her wishes come true.  It is a lovely story and I hope that it's true, but even if it is, I can't imagine that it occurred in such a perfect story arc as in the manner that Elinore presented it.

I didn't enjoy this book as much as I did the first volume of letters, but I think that's mainly because the book is much shorter.  The narrative style is just as engaging, the humor just as light and easy to catch, and the characters just as interesting.  And once again, I was just so struck by how different the lifestyle for homesteaders was.  For example, this entire hunting party of probably five people descended on a complete stranger's home.  This man was getting ready for his mother to come from the East Coast to live with him, and so he left the hunting party alone in his home to go to town (a trip of two or three days) to pick her up.  The hunting party then set to work completely cleaning his house, redecorating, sewing bonnets and knitting blankets for the mother, and even putting together two chests of drawers for the bedrooms.  All in two days.  For a man they had just met, who had trusted them enough to leave them alone in his home.  It was just absolutely amazing to me, and I couldn't help but feel wistful and sad that those sorts of communities don't exist any more.  It's not even a community, really- it seems more to be this mindset of, "We're all out in this difficult, remote area of the world together and we've got to help each other out."  Reading this book, it felt so much less isolated than living alone in a big city.

I'm sure that Elinore was idealizing her life a lot and it's very possible that she embellished her stories, too.  She makes very brief mention of World War I, but it hardly touches her life (granted, it barely touched any American's life in 1914).  But I so enjoyed reading her letters and learning about what life was like just 100 years ago.  Now I've gone and downloaded a ridiculous number of memoirs that describe life on the American frontier!  So... get ready for many more reviews on this topic over the coming months :-)
Posted by Aarti at 2:00 AM