Review: An English Woman-Sergeant In the Serbian Army by Flora Sandes 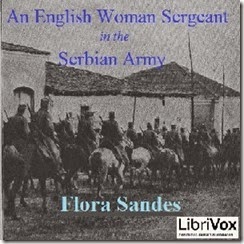 Have you ever stumbling across something by accident and then instantly became obsessed with it? That is me right now with Flora Sandes. Obsessed! I was just minding my own business, scrolling through the Librivox catalogue, when I came across An English Woman-Sergeant In the Serbian Army. Well, I thought, this sounds intriguing. I started listening and couldn’t believe my ears. Is this real life? Was Flora Sandes a real person? I had to find out for sure. Fool me once, Public Domain! And it was true! This really happened! 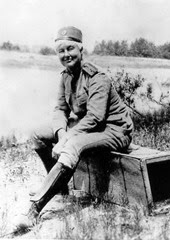 Flora begins her story with herself travelling back to Serbia after a brief vacation from the action during World War I. England was an ally to Serbia. Serbians needed all the help they could get. Flora volunteered to be a nurse with St John Ambulance. She quickly became a favorite with the men. She’d smoke, drink, and share a laugh with them, as well as hold their hands as they died.

Flora decided early on to stick with the Serbian Army even though she was British. The Serbians’ ideas about women in the combat were more enlightened than the Brits’. She travelled with the army while they retreated from the Austrian advance, taking care of the wounded and sick men. At some point Flora is asked to make a choice.

They said the journey through Albania would be very terrible, that nothing we had gone through so far was anything approaching it, and that they would send me down to Salonica if I liked.

Flora says Yes! to Albania, though they find the locals very hostile to their presence. They get fired upon a lot. But here Flora finally gets to be a real soldier and holds her own against the enemy.

I had only a revolver and no rifle of my own at that time, but one of my comrades was quite satisfied to lend me his and curl himself up and smoke.

It isn’t all shooting dudes all day long though. The Serbians were constantly on the move. Along the road Flora saw the corpses of horses that died of starvation or exhaustion. The men themselves weren’t doing so good, as the locals put up the prices of food when the soldiers arrive in their towns.

As for the men, they showed her great respect. She says she expected resistance, but never experienced it, even in her interactions with the British commanders. Her Serbian commander makes her a corporal, and eventually a sergeant, making her the only woman to officially serve in the Serbian Army during World War I. 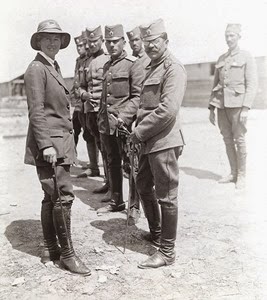 An English Woman-Sergeant In the Serbian Army ends unexpectedly, but this is because Flora wrote it in 1916, while the war was still ongoing, to raise funds for the Serbian Army. Flora ain’t got time for writing memoirs. The writing is what you would expect from a woman like Flora: to the point, honest, unadorned. It’s also pretty short. In 1927, she wrote her autobiography, An Autobiography of a Woman Soldier. I will be reading that, I can tell you.

The only thing I didn’t like about this memoir was the patronizing introduction by a Serbian politician:

But she only took to a rifle when there was no more nursing to be done, as, owing to the Army retreating, the wounded could not be picked up and had to be left behind.

No, dude, she would have “took to a rifle” if that had been an option from the start.

Here are some facts about Flora:

Project Gutenberg doesn’t have the text but The University of Toronto has a text version.

Posted by Chrisbookarama at 12:36 AM