Mr. Utterson, a London lawyer, is concerned that his friend, Dr. Jekyll, has developed a relationship with an unsavory character named Mr. Hyde, especially as Hyde has been connected with several incidents of violence and assault. Eventually Jekyll assures Utterson he's cut off all ties with Hyde, but the mystery of Hyde's connection to Jekyll persists, especially after Jekyll disappears.

A few weeks ago, I got it into my head that I was going to read The Strange Case of Dr. Jekyll and Mr. Hyde. This is a book I'd had no interest in reading before; and, considering I DNF'd Treasure Island earlier this year, I didn't have super-high hopes for it. I was pleasantly proved incorrect—I loved Jekyll and Hyde, and this novel will definitely land on my short list of favorite reads of the year.

Robert Louis Stevenson had me from the very beginning of the story with his comparison of Utterson—a completely conventional, moderate, and reasonable man—to that of his friend and distant relative, Mr. Enfield, a "well-known man about town":

It was a nut to crack for many, what these two could see in each other, or what subject they could find in common.


In this way Stevenson immediately sets us up for a story about the multiple sides of men's characters—for, if Utterson was completely mild-mannered and Enfield completely dissolute, how would they manage to enjoy one another's company so much? Clearly there's a little of Utterson in Enfield and vice versa.

Fittingly, it is through Enfield that the character of Hyde is introduced, seen in a disreputable part of town knocking over a little girl. Utterson also knows Hyde, or knows of him, because Hyde is mentioned in the will of his friend, Dr. Jekyll. Like Utterson, Jekyll is an upstanding gentleman whose friends are "all intelligent, reputable men and all judges of good wine." So what would Jekyll have to do with a reprobate like Hyde? Utterson wonders.

Obviously we all know the answer to that question, even if we haven't read the book. But the real issue driving the story is WHY—what would drive Jekyll to even conceive of a way to isolate a part of his personality and then switch from one to the other?

Jekyll and Hyde was not what I was expecting based on the adaptations I've seen. It's more of a detective story than a horror story, and neither Jekyll nor Hyde are as good or evil as they've been portrayed. Is Hyde really evil, or is he just uncivilized? He knocked over the girl by accident, and he did offer recompense to her family. It seems like Hyde's demonic nature is more perception than reality; as soon as people see him, they detest him. According to Enfield,

I had taken a loathing to my gentleman at first sight. So had the child's family, which was only natural. But the doctor's case was what struck me. He was the usual cut-and-dry apothecary, of no particular age and colour, with a strong Edinburgh accent, and about as emotional as a bagpipe. Well, sir, he was like the rest of us; every time he looked at my prisoner, I saw that Sawbones turn sick and white with the desire to kill him.


How else is a person supposed to react when people treat them like that?

Jekyll wasn't the mild-mannered shy physician I anticipated, either: he's a gentleman bachelor NOW, but it's stated that in his youth he was "wild," and there's a certain "slyness" about his face.

It's for these reasons that I don't see The Strange Case of Dr. Jekyll and Mr. Hyde as being a tale of good versus evil—instead, it's a cautionary tale about conformity. Jekyll wants to be normal and to fit in with those men who are respectable and intelligent, so he tries to remove the part of himself they would shun if they knew about it. Whether it's addiction, the id, or a demon, Hyde represents whatever society rejects. In Jekyll's attempt to conform to society's definition of a gentleman doctor, he in turn rejects the part of himself that society finds distasteful, and in the process he destroys himself.

The Strange Case of Dr. Jekyll and Mr. Hyde is one of those deceptively simple novels, like Animal Farm, that's a good story and also makes you think. It's accessible to people of all ages and backgrounds and can be read simply as a great story, an indictment of Victorian society as a whole, or anywhere in between. Definitely a book I think is a must-read.

Download The Strange Case of Dr. Jekyll and Mr. Hyde by Robert Louis Stevenson at Project Gutenberg|Librivox|Internet Archive
Posted by Heidenkind at 4:00 AM

Today is—or would be, if she was still alive—Anna Katharine Green's birthday. Green was the first woman to publish a mystery novel (The Leavenworth Case in 1878), and her books tend to be really weird. I don't know why I keep reading them, but I find them bizarrely fascinating. Like watching a Japanese game show: you have a general sense of what's going on, but you can also tell there are things getting lost in the translation. Except in Green's case, the translation is one of time rather than language.

By coincidence, I'm taking a class on historical fiction through Coursera right now called Plagues, Witches, and War: The Worlds of Historical Fiction, and Anna Katharine Green is one of the major authors featured. Apparently she was not just the first woman to publish a mystery novel, but was also the first person to write a historical mystery! Mind: blown.

The book in question is titled The Forsaken Inn; and yes, it's already on my Kindle. I thought it would be fun to include the instructor, Bruce Holsinger's, lectures on it here (I really hope the videos work):


Green was a realist? HOLY SHIT YOU GUYS, her books make so much sense now (I'm kidding, they still don't make sense). As a side note, Holsinger's obvious enjoyment of Green's very Victorian writing style is kind of adorkable.


One of the most interesting things I'm learning from this class is how much information can be found in the title pages of old books. They're like the metadata files of books in paper!

Anyway, happy birthday to Green, a very interesting and innovative author in her time period. Nice to see her getting some more attention!

Posted by Heidenkind at 4:00 AM 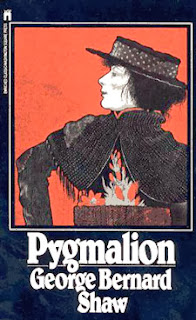 Original Publication Date: 1912 -- Genre:  Play, drama -- Topics: Coming of age, bildgunsroman Review by : Liz Inskip-Paulk (www.ravingreader.wordpress.com)
Although having been vaguely familiar with this story, I’d never actually sat down and read the actual play or researched its background, so decided to do that this week. I’m quite new to reading plays and it’s rather a different experience than reading a novel, but it’s enjoyable all the same. This one, based on Greek myth, is a familiar story structure based on taking someone (sort of Noble Savage/Frankenstein idea) and then transforming them into a higher class of creature (a la Cinderella tale).  And as a sign of the times and the national culture, this play’s characters are extremely class-ridden. (There’s also a trace of the ongoing science versus art debate as well.)


In this case, the characters of Dr. Higgins and Colonel Pickering, two self-taught scholars in linguistics, pull flower seller Eliza Doolittle off the streets and teach her how to become a Duchess. There are, of course, unforeseen events that occur and it’s actually much more serious that the adaptation “My Fair Lady” would have you believe. There’s definitely an element of Higgins/Pickering (both men) being Superior Gods of a type, and Eliza (the female character) being molded/taught and in the position of a child or less being.


(It’s also argued that Pinocchio is an adaptation of this Greek myth as well, and the narrative was well known before this play and now afterwards, Magnum PI and Star Trek: Voyager, for instance, both have versions, and then there are numerous Hollywood versions including Pretty Woman and with an interesting twist backwards, the Stepford Wives.)

According to Greek myth (and Ovid, although I haven’t read Ovid), Pygmalion was a sculptor who fell in love with a statue he carved. (The statue’s name was Galatea, FYI, and quite frequently the two names are paired together. (Doesn’t come up too often in my social circles though.)  The story finishes with a happy ending in most versions (as there was a popular demand for that), but Shaw plainly didn’t want that to happen (even though it did in some of the more commercial stage productions – which he hated.) In 1916, four years after the play had first been staged, Shaw was cross enough to add an afternote to the play in which he explains why he thought the ending had to be the way he wrote it. (It’s not a predictable ending, for the most part. The narrative is also quite feminist for the times, although that decision is supported by Shaw’s background and philosophy.)


“I sold flowers. I didn’t sell myself. Now you’ve made a lady of me, I’m not fit to sell anything else.”


Shaw was an Irish playwright and worked to establish the London School of Economics (although it’s not clear to me what the connection would be between these two areas.) His mum was a professional singer, one of his sisters was a professional singer, so there was stage in his bones and childhood experiences.  He was an ardent socialist (clear in this play) and, curiously enough, is the only person who has ever been awarded both the Nobel Prize in Literature (1925) and an Oscar (1935) for his work on Pygmalion. Having no want for public honor, Shaw wanted to refuse the Nobel but accepted it at his wife’s bequest. The financial prize was personally rejected and he asked that it be used to finance translation of a Swedish playwright’s work.

Interesting note: Shaw joined the British Interplanetary Society, a group focused on space travel and exploration, when he was 91. I love that he was always learning something new throughout his life.