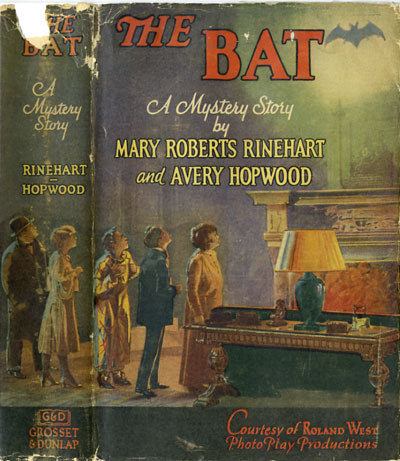 All through the city and its neighboring suburbs, wealthy people are being terrorized by a master criminal known as the Bat--so called because of the signature he leaves at every crime scene. He's so elusive the police are convinced he's a respectable gentleman by day, and a criminal by night, hiding in plain sight. The Bat seems to be unstoppable, until he meets his match: a little old lady who refuses to be frightened from her home.

Here's the thing with The Bat: it's actually a play adaptation of The Circular Staircase, Mary Roberts Rinehart's second novel, which she wrote in collaboration with Avery Hopwood. The biggest change she made for the play was the addition of the Bat. And if the cover of this book makes you think of Batman, there's a reason for that: Batman was directly inspired by The Bat.

The Bat was hugely successful, with receipts running into the thousands of dollars per night, and there were several movie adaptations made of it (including a silent film you can watch at Internet Archive) as well as this novelization, which is credited to Rinehart and Hopwood, but was actually written by poet Stephen Vincent Benét.* 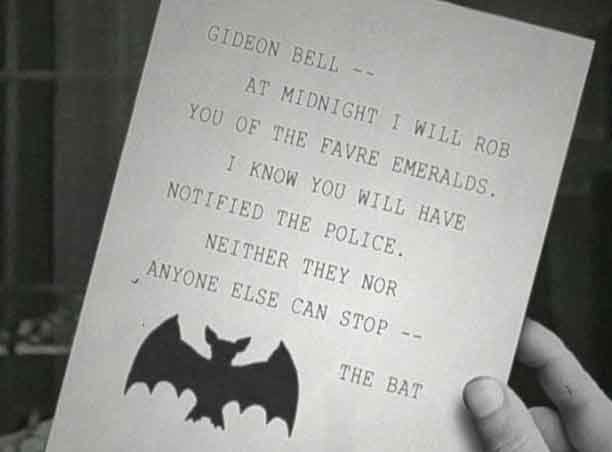 Considering The Bat is an adaptation of an adaptation, it's not that bad. The first third is actually pretty good: it's very cinematic and visual, has lots of humor, and does a good job of setting the scene and presenting the motivations of the central characters in an interesting way. I warmed up to Mrs. Van Gordon, the old lady, immediately; and while her interactions with Lizzie the maid weren't laugh-out-loud funny, they were entertaining.

But The Bat seriously began to lose me in the second third. It started to feel like a play adaptation at that point: everything occurs in Mrs. Van Gordon's living room, which is clearly the set, and the descriptions sound as if Benét is simply telling us what happens on stage. So that was a little dull.

Plus, this is the type of story where there is A LOT of plot going on. Plot upon plot upon plot. Nearly everyone isn't who they say they are, there are tons of people who could be the Bat, and even those who aren't the Bat have their own agenda, which more likely than not involves stealing money out of Mrs. Van Gordon's house. The threads are woven together pretty tightly, but for some reason I found it to be really BORING. The Bat put me to sleep on several occasions. It's strange because I feel like it SHOULD have been interesting; it just wasn't. I think there was too much plot for me and not enough characterization; even watching the movie version I was bored out of my mind. Every single character is more of a "type," and... that's about it. They're types after a thing, and they all keep coming and going from the same room. I think I started to fall asleep just writing that sentence.

In the end, The Bat was a DNF for me. It was beginning to feel like Reading Torture. I did kind of want to find out who the Bat was, but I have a feeling I already know; and anyway, I don't care enough to go through Reading Torture for it.

Get The Bat at Librivox|Project Gutenberg

*Information about The Bat's receipts and contributors comes from Improbable Fiction: The Life of Mary Roberts Rinehart by Jan Cohn (1980, University of Pittsburgh Press).
Posted by Heidenkind at 12:00 AM