The Black Cat is probably Edgar Allan Poe's most famous short story. I know it was one of the two Poe stories that was in my English textbook in middle school (and the fact that I remember it should tell you a lot about what an impression it made upon me as a kid). Basically it's about a guy who's a mean drunk and winds up killing a faithful pet, his cat. He later suspects the cat has come back to life to haunt him and this leads him to make some rather poor decisions.

After re-listening to this on Librivox (read by the boss Ralph Snelson) as an adult, I have to say I didn't really enjoy reading it. It's way cynical, and also a little predictable (I have read it before, but still). It's very well-written, of course, but it's not the type of story you come away from with the thrill of being scared silly--more like the sense that it's time to take a good long look in the mirror. Still, you should read it if you haven't.

And now it's time to play What Is the Cat a Metaphor For?! Here are my ideas: 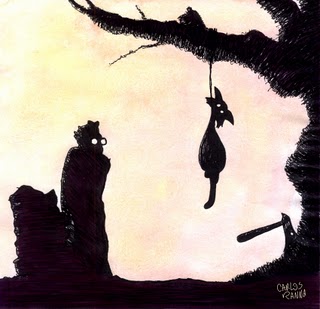 When the narrator hangs the cat, he says

Who has not, a hundred times, found himself committing a vile or a silly action, for no other reason than because he knows he should not? Have we not a perpetual inclination, in the teeth of our best judgment, to violate that which is Law , merely because we understand it to be such? This spirit of perverseness, I say, came to my final overthrow. It was this unfathomable longing of the soul to vex itself - to offer violence to its own nature - to do wrong for the wrong's sake only - that urged me to continue and finally to consummate the injury I had inflicted upon the unoffending brute. One morning, in cool blood, I slipped a noose about its neck and hung it to the limb of a tree; - hung it with the tears streaming from my eyes, and with the bitterest remorse at my heart; - hung it because I knew that it had loved me, and because I felt it had given me no reason of offence; - hung it because I knew that in so doing I was committing a sin - a deadly sin that would so jeopardize my immortal soul as to place it - if such a thing wore possible - even beyond the reach of the infinite mercy of the Most Merciful and Most Terrible God. (excerpt from Literature Network)

The hanging of the cat resembles a lynching in that it's an act of revenge, but not against any wrongdoing on the part of the cat--rather, the cat represents what the narrator should and could have a partnership and friendship with, yet he can't because every time he sees it, he's reminded of what a terrible person he's become, by his own hand. So he lashes out. Even after the cat is dead, the narrator still fears that it will bring a reckoning he knows he deserves.

Aubrey Beardsley's illustration of the Black Cat
Theory #2: The Wife

It's probably more likely that the cat is a metaphor for the narrator's wife. She's the one who gets the cat for him, and early on the cat is likened to a witch by the wife herself ("I'm not a witch, I'm your wife!"), which seems to plant the seeds of his later attitude toward the cat. The wife shares his love of animals, and when the narrator starts drinking, he admits to beating both her and their pets. And of course there's the fact that in his attempts to kill the cat--again--the narrator actually ends up killing his wife.


Have you read The Black Cat?
Posted by Heidenkind at 12:00 AM